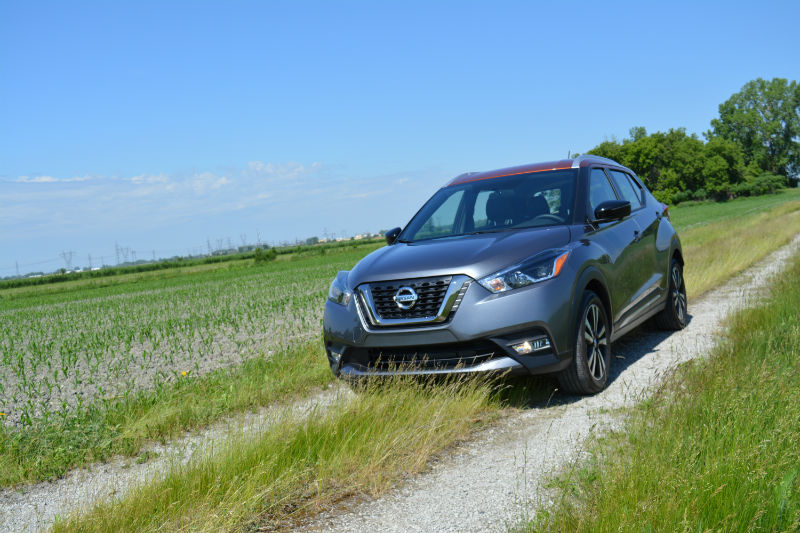 Montreal, QC. This was a refreshing first drive event. You would not believe how often new product presentations are loaded with half-truths, twisted facts and marketing-focused hyperbolic attempts to sway us into thinking one way or another about said product. The Kicks presentation was reasonably brief, to the point and with only two minor aspects that were either overlooked or over-emphasized.

To use the words of a Nissan rep, the Kicks is an honest product. And that pretty much sums the Kicks. In fact, like the Qashqai and the Rogue, the new 2018 Nissan Kicks is not the best at anything but is extremely competent in most respects. According to Nissan, the Kicks is rated as the most fuel miserly in its segment, but the reality is that a gap of 0.3 or 0.4L/100 km has little bearing in real life. Regardless, it is rated as the best.

There’s no secret as to how the Kicks managed such a low fuel consumption rating. At 1,215 kg, it is one of the lightest vehicles in the category and features the least powerful engine. While there were graphs on fuel numbers, there wasn’t one on engine outputs. Nissan was, however, not coy about the fact that the Kicks is not a rocket. This was minor aspect number one. 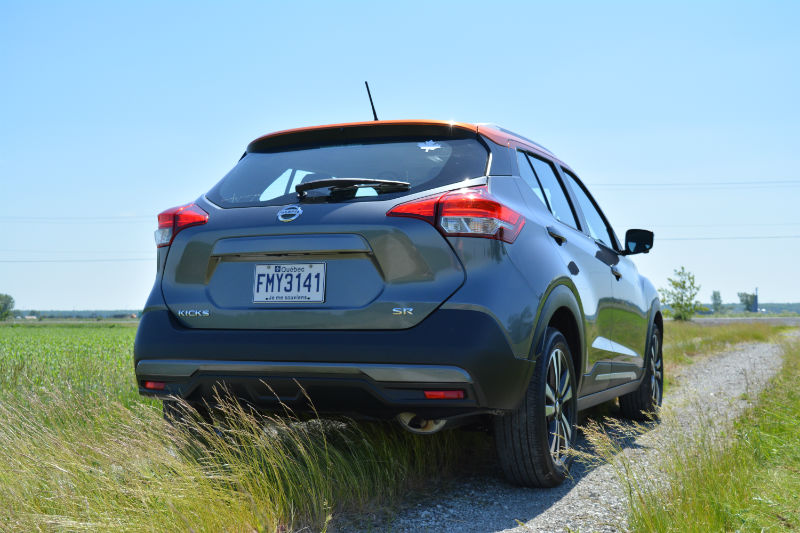 The 1.6-litre 4-cylinder engine produces 125-horsepower @ 5,800 rpm and 115 lb.-ft. of torque @ 4,000 rpm. With only a driver onboard and a half tank of fuel, I doubt it’ll reach 100 km/h in under 10 seconds. Having said that, the standard CVT transmission’s programmed for instantaneous throttle response which takes a little time to adjust too. Merging onto the highway and passing requires some pre-planning as despite the CVT’s ability to fake up- and downshift, the efforts on the 1.6-litre’s behalf are massive. On the other hand, in the city, the powertrain’s performance is more than adequate but this is not the Kicks’ trump card. In fact, it has many of them.

The Kicks’ chassis is a small wonder. Truthfully, I’ve not driven a compact product that displayed as much poise and civility from its suspension calibration and overall refinement. The vast majority of the streets of Montreal and the Province of Quebec would barely qualify as “paved” in most other areas of the world. The little Nissan’s solid platform, shared in part with other small Nissans, allows the dampers and springs to do their work with minimal intrusion or real disruption into the cabin. Steering is fine as are the brakes.

Aesthetically, the 2018 Nissan Kicks is very cool. It is inspired by the Brazilian Kicks Concept that was revealed at the 2014 Sao Paulo motor show. It sports Nissan’s signature V-Motion front grille, a lovely rising body-side character line and an exaggerated floating roof-line. The latter was done specifically for the $150 optional two-tone paint schemes. Like the Qashqai, the Kicks is far better looking than the larger Rogue, and all other Nissan small cars save for my darling Micra. 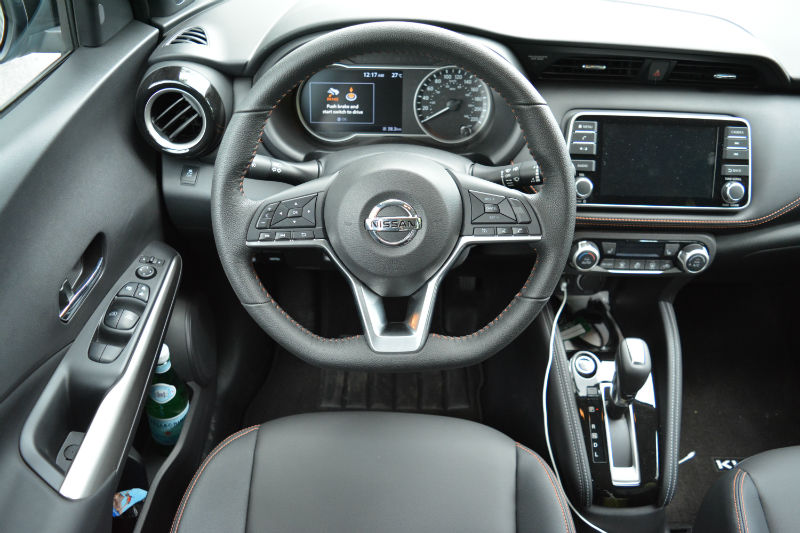 The other little annoyance in the Kicks’ presentation package was the Bose Personal Plus sound system which features speakers located inside the driver’s seat head restraint. I completely understand the why as the Kicks is squarely aimed at younger buyers who I swear were all born with headphones attached to their ears. The short of the long here is that my drive partner and I noticed nothing worth writing home about.

Having said that, the 2018 Nissan Kicks has positioned itself as a serious value and content contender. At $17,998, the base Kicks S FWD includes features that are often part of an optional package. Get this: At this price, your Kicks comes with a 7” screen, a D-shaped sport steering wheel, Bluetooth, 3 USB ports, push-button start and Intelligent Emergency Braking with Forward Collision Warning as part of the Nissan Intelligent Mobility safety group. Moving to the SV adds heated front seats, Apple CarPlay and Android Auto, 17” wheels, satellite radio and more for $20,898. The SR retails for $22,798 and throws in the Bose thing, remote start, rear roof spoiler, synthetic leather and LEDs.

The only thing we’re thinking could be missing is AWD. The least expensive Qashqai with AWD is $24,898 so it’s not a huge step up the price ladder. Regardless of the selected trim, the cabin turns out to be very roomy, with a very generous boot. The front seats are comfortable although lack lumbar support for the longer journeys. The rear bench is plenty capable of hauling three of your best friends while the trunk, according to Nissan, can hold up to 716 litres of gear!!

The dashboard is very modern and simple. The 7” screen’s integration is unique and brilliant; it looks as though it is resting on the surface. The HVAC controls are uncomplicated and very straightforward.

By the end of the day, I’d concluded that the new 2018 Kicks had become my new favorite Nissan product, barely besting my beloved Micra. Like the Micra, what you see is what you get with the Kicks, but there are a number of pleasant surprises equipment-wise. It is entertaining to drive and does not need to be more powerful. 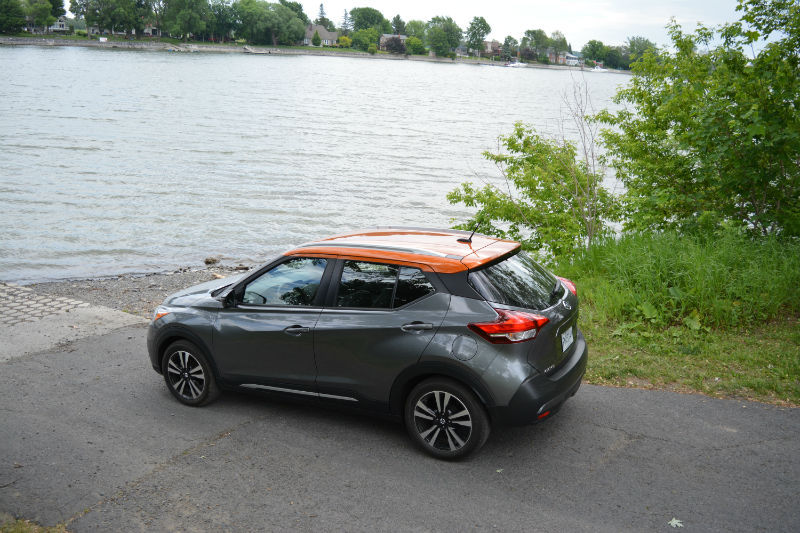 This sixth crossover addition to Nissan’s line-up will put the hurt on the Toyota CH-R, Kia Soul, Hyundai Kona, Ford EcoSport, Mazda CX-3 and Nissan’s own Sentra and Versa. In this group, only the CX-3 and Kona offer AWD, both priced between the Kicks SR and Qashqai S AWD. If you don’t need AWD, the Kicks will please tremendously.