The job being what it is, I regularly drive 70 to 80 new cars every year. Some disappear in the void that’s become my memory in the last two years due to lack of sleep (thanks son) while others have left an indelible mark, be it positive or negative. I clear as day remember the first time I drove a BMW i3, in the winter of 2015 – I hated it and it was a complete disaster.

In its first few years on the market, the car featured a 22 kWh battery that provided roughly 120 km of range. The catch was that this distance was attainable in ECO mode which not only limited the maximum speed but cut out heating. Effectively, with the heat on, we never managed much more than 70 km per charge. What’s more, the car was horrible in wintery driving conditions with limited traction, less grip, and no fun. In 2016, BMW announced a more powerful 33 kWh battery which vastly improved range and performance. And finally, I got to test drive it in the dead of summer. And I love it.

As always, the i3 stands, or is that sits, apart from all other cars on the road, or in the parking lot. Its tall and narrow shape gives its single box design a unique configuration that is unusual in North America. The French carmakers have dabbled in oddities such as this before. For example, look up the Peugeot 1007. Yes, the Pug was ugly whereas the Bimmer is attractive. 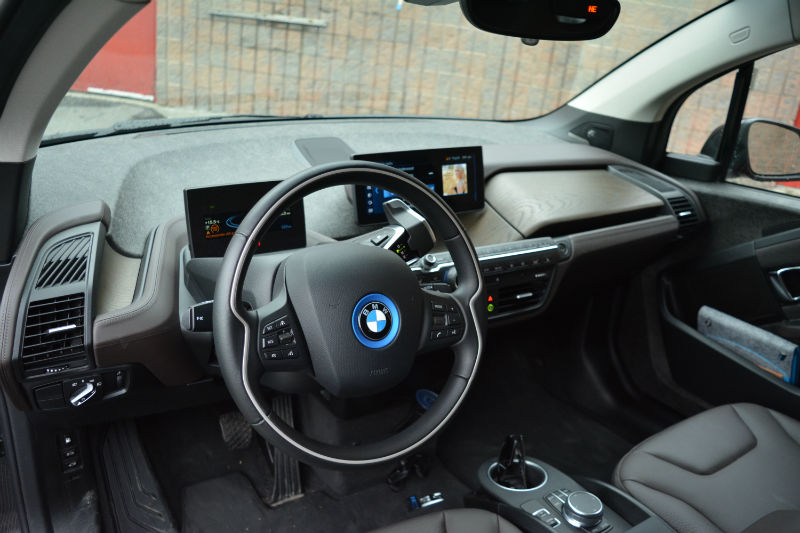 The new i3S takes the quirkiness and adds visual muscle into the mix. It features flared wheel arches, black mirror caps, a-pillar and roof trim as well as 20” wheels shod with wider 175/55 front and 195/50 rear performance tires. These minimal styling improvements make a world of a difference especially when an actual color like red or blue is selected.

The i3S’ shell is unlike anything and so is its cabin. The dashboard’s shape and makeup will be a topic of conversation for all passengers that climb aboard. It is completely asymmetrical from the driver-pod with gauge display, central dip filled with a 6.5” screen followed by a raised glove box. The whole unit seems to float above the floor and is made up of many different materials. Said materials are sourced from sustainably grown eucalyptus and kenaf, a form of hemp used to reinforce dashboard and door trims. The leather is tanned using olive leaf extract and, although it all reads as very vegan, the final product is as functional as it is beautiful.

The BMW i3 and i3S are not large automobiles. Overall length sits between that of a Nissan Micra and Versa Note with roughly the same width as the latter. This explains in part why it’s a 4-seater and why, if you’re more than average height, you’ll not want to spend too much time on the bench. The trunk is limited to 428 litres of volume which doesn’t leave much room for real life. An average one box trip to Costco, plus extra sides, maxed out the available space. There is a small “frunk” but it does not seem waterproof so best no to risk putting valuable anything in there. 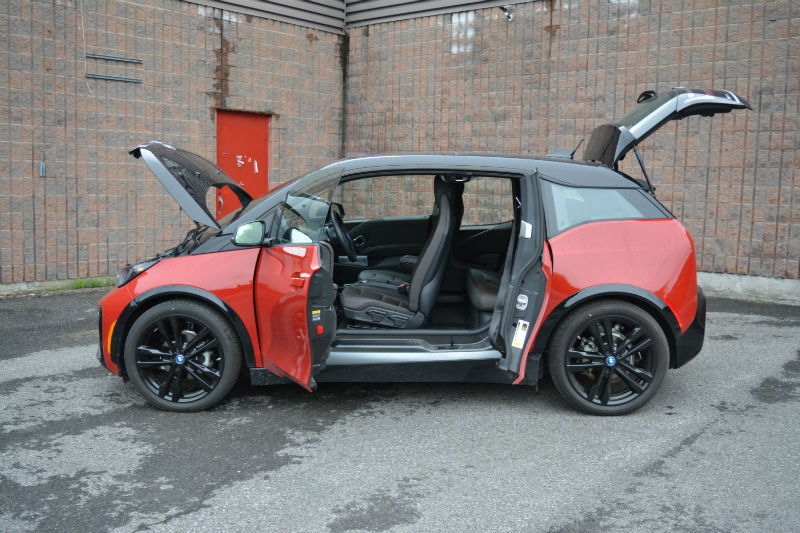 The wide-opening front doors and rear coach doors make ingress and egress a breeze for both rows of passengers. The front seats are comfortable but it’s the amount of leg- and headroom that impresses. Storage up front is generous – this is another small car destined first and foremost to single people or couples.

My tester included the red paint job, black wheels, the wood, the driver assistance, and premium packages and glass roof for a grand frightening total of $66,145. Ouch. This is a lot of money and it’s difficult to say that there’s real value in the product. Its fault, and what makes it great at the same time, is the use of many exotic materials including carbon fibre. If you’re willing to spend the money on an i3, best to get the S with the range extender and avoid options and packages.

All i3s have an AC Synchronous electric motor in the rear. The i3’s develops 170 horsepower and 184 lb.-ft. of torque. The i3S is gifted thanks to its 184 horsepower and 199 lb.-ft. of torque. Both get a 33 kWh battery pack which is good enough for approximately 180 to 200 km of EV range. The range extender (RE) is a 2-cylinder gasoline unit (attached to a 7.2-litre fuel tank) that has no direct contact with the drive wheels. It increases the total range to just shy of 300 km. 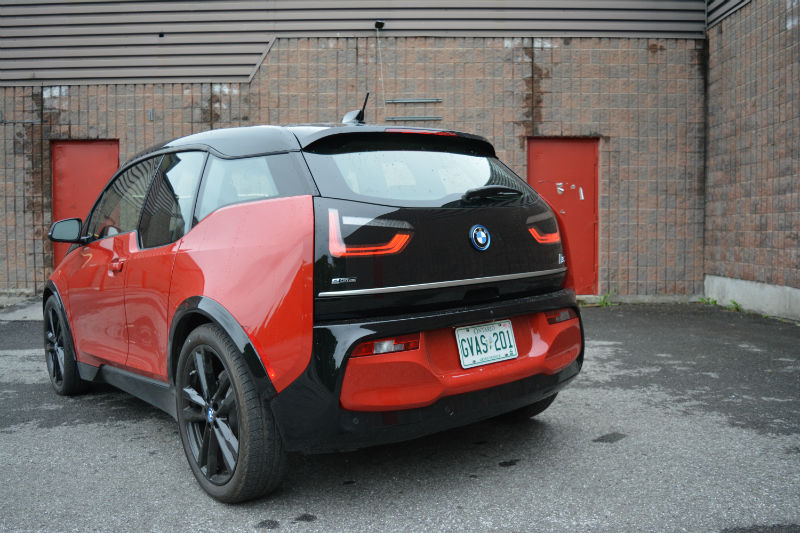 Through my week with the car, I covered 300 km and did not add a drop of fuel in the tank. I like that. I did charge it at almost every opportunity but never stressed about it thanks to the EV’s range.

The range extender adds about 275 lbs. to the total curb weight which explains why the sprint to 100 km/h takes 7.6 seconds versus the non-RE version requiring 6.9 seconds. The bottom line here is that since all the torque is available from not, it feels very quick. The massive torque is immensely entertaining.

My favorite aspect of the drive is the regenerative braking. Without toggling through menus or pulling on levers, the i3’s regen braking was omnipresent allowing the driver to almost never have to use the physical brake pedal. It’ll even bring the car to a full stop! It’s brilliant.

As a road-going car, the i3S is like and unlike all the other EVs. Like, because it’s quiet and the torque thing and unlike, because it’s RWD and in the S’ case, it comes with a sport suspension. Despite the tiny bicycle tires, the i3S handles quite well be it in the city or at highways speeds. Steering is quick, and the ride is sportier than your average EV. There are drive modes, from Eco Pro+ to Sport, but Comfort remains the best overall setting.

The 2018 BMW i3 has no direct competition other than perhaps the Tesla Model 3. While I sincerely enjoy the BMW and will now fondly reminisce about the car, I can’t accept paying over $50k for one. Would I spend that kind of money on a Model 3? Couldn’t tell you, I’ve never driven one.

The current Porsche Taycan Turbo S delivers 750 hp and 774 ft-lb of torque. The super sedans from Tesla and Lucid are already...
Read more
Previous article2020 Tesla Roadster will be a weapon
Next article2018 BMW X2