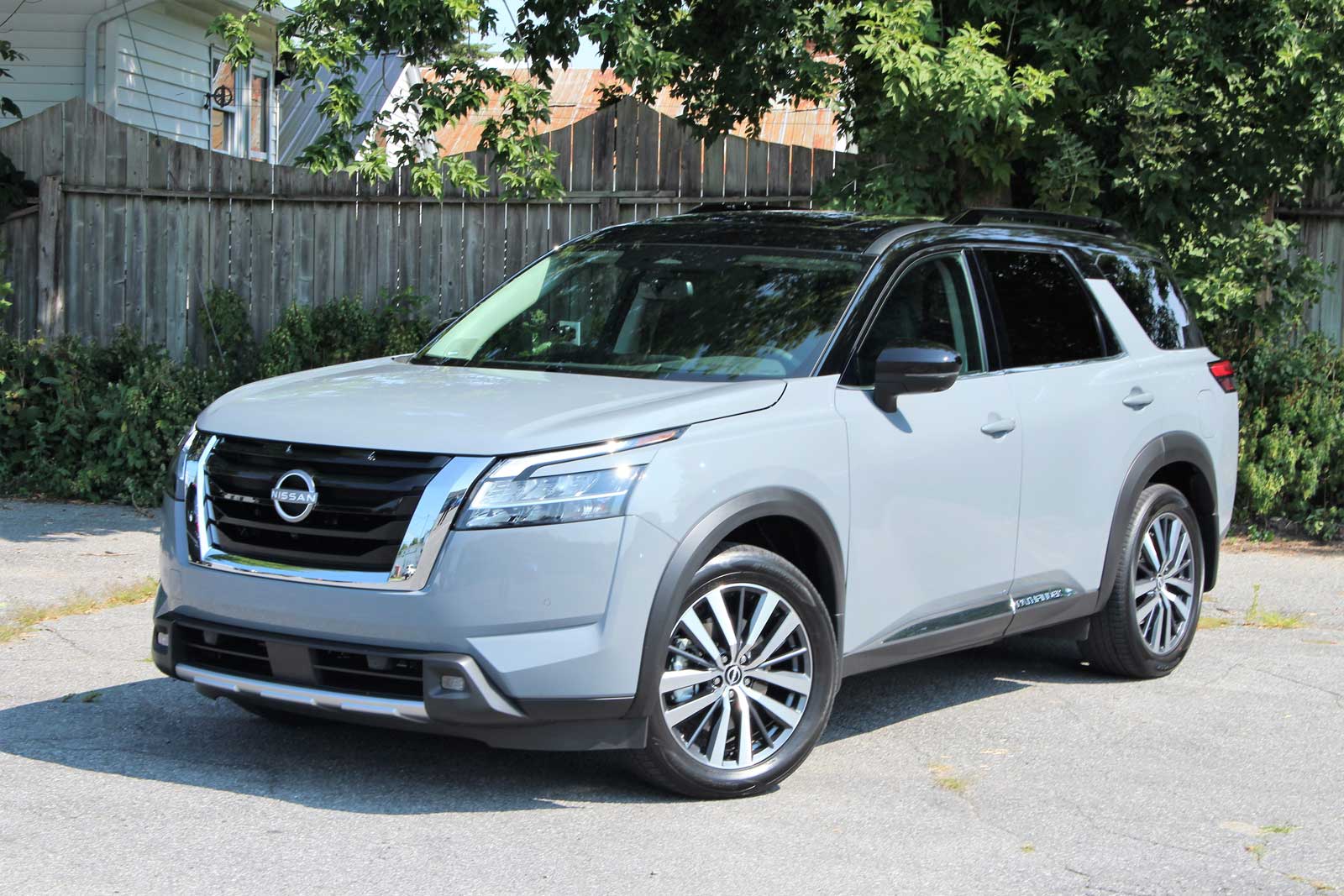 KINGSTON, Ontario – The three-row, midsize crossover segment has become a very important one for the automakers in the North American market, and keeping its product fresh is crucial for success. The 2022 Nissan Pathfinder finally brings that freshness as the Japanese brand dragged the previous-generation model for a little too long.

While still a versatile and competent vehicle, the outgoing Pathfinder showed its age in both design and functionality. Moving from a body-on-frame to unibody architecture when it launched during the 2012 calendar year, consumers quickly embraced it. Within two years, sales of the nameplate tripled in Canada and in the United States, but dropped significantly by 2019. It’s worth nothing that Nissan decided to skip the 2021 model year for the crossover. 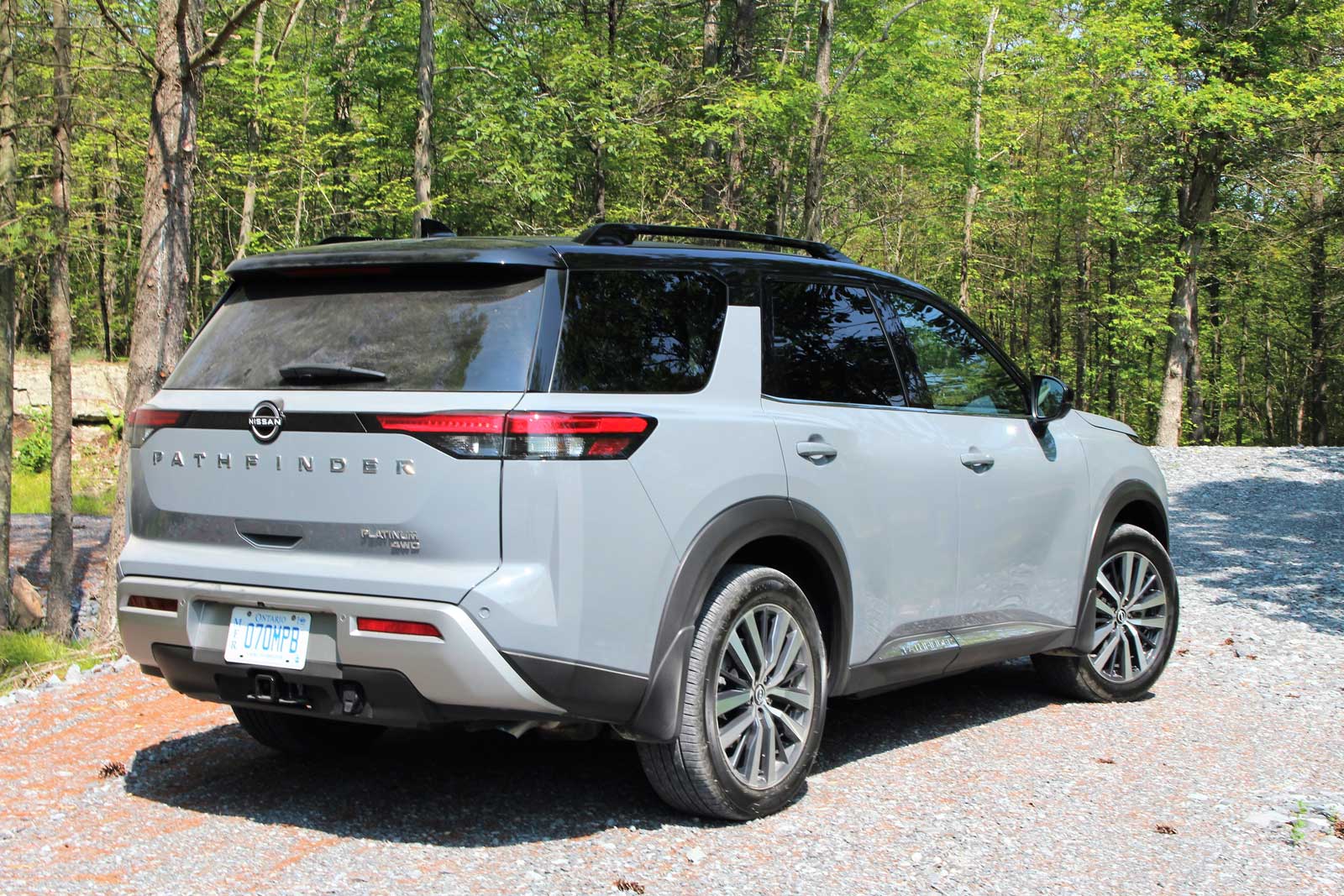 The fourth-generation, 2022 Nissan Pathfinder still rides on the company’s D platform, shared with the Nissan Murano, the Nissan Maxima and the Nissan Altima, along with various Renault models sold in other markets. Wheelbase is unchanged and overall length has been reduced by about an inch or 22 millimetres, but the vehicle is wider, rolls on a wider track and its roofline is marginally higher.

The extra width allowed for a roomier third-row seat, which can now accommodate three (small) occupants instead of two for a total capacity of eight passengers—or seven in higher-end trims equipped with new second-row captain’s chairs instead of a bench. The Honda Pilot, Toyota Highlander, Hyundai Palisade, Kia Telluride, Chevrolet Traverse and Subaru Ascent also offer room for up to eight, while the Ford Explorer, the Mazda CX-9, the GMC Acadia, the Jeep Grand Cherokee L, the Dodge Durango and the Volkswagen Atlas have a max capacity of seven passengers. 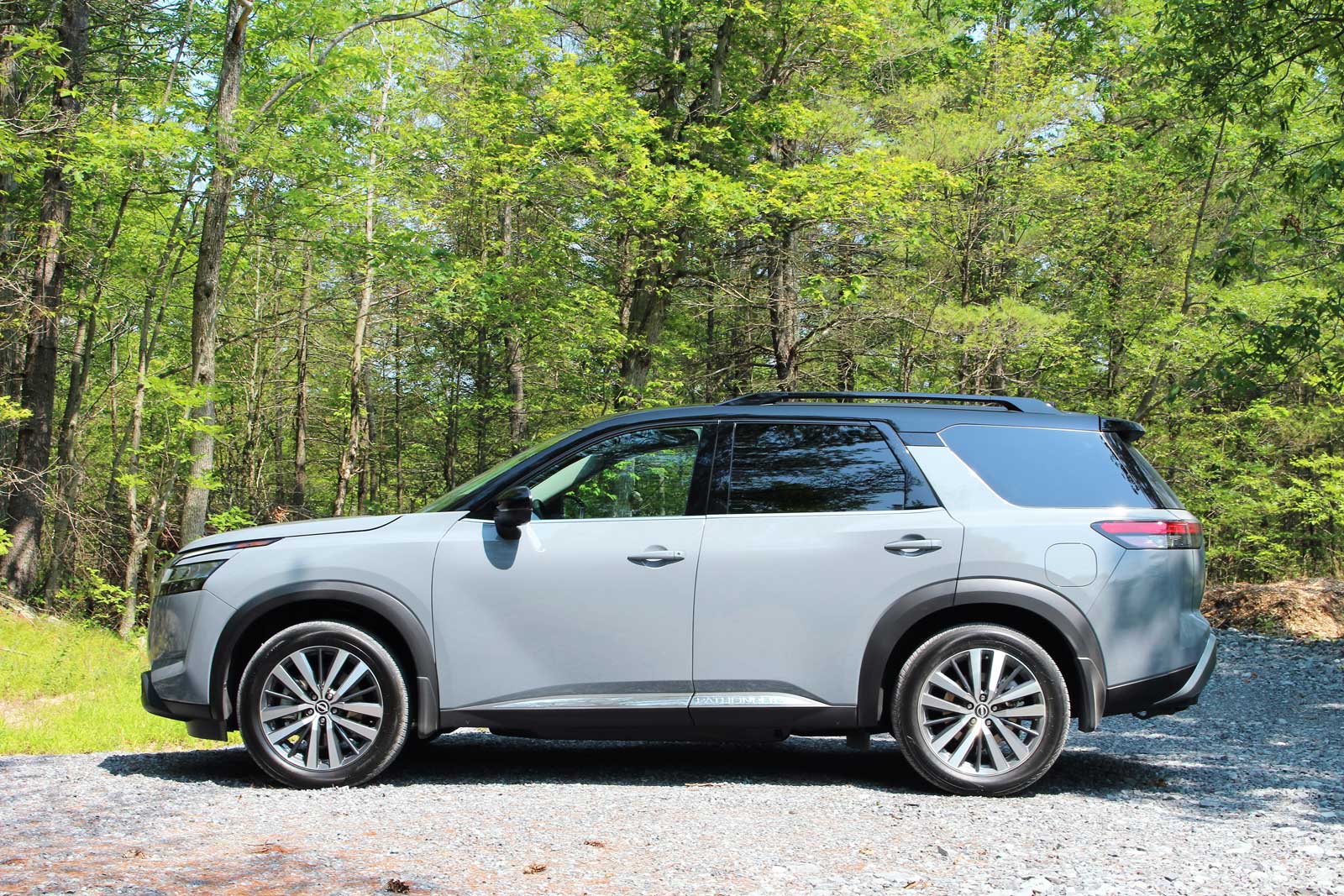 The new Pathfinder also features theatre-style seating, meaning the second and third rows sit a tad higher than the preceding one, reducing the feeling of confinement, and the optional panoramic sunroof also helps in that regard, too. The second-row seat cushions are higher off the floor than in the previous generation, enhancing comfort on longer rides. Unlike many rivals, entry and exit into the third row is fairly easy in the Nissan, and the second-row seats are easy to operate for kids with one-touch release buttons and not-too-stiff mechanisms.

In addition, Nissan rightfully claims class-leading front-row legroom, while front-row headroom is among the best. The rest of the interior dimensions are more or less average in the segment, and can’t match the space found in the Pilot, the Palisade, the Telluride and especially the Traverse. However, as far as passenger accommodations go, the 2022 Nissan Pathfinder gets a good score, with more storage space up front and 16 beverage holders spread across the cabin. We wish the front pillars were thinner, though, as they reduce visibility in city intersections. 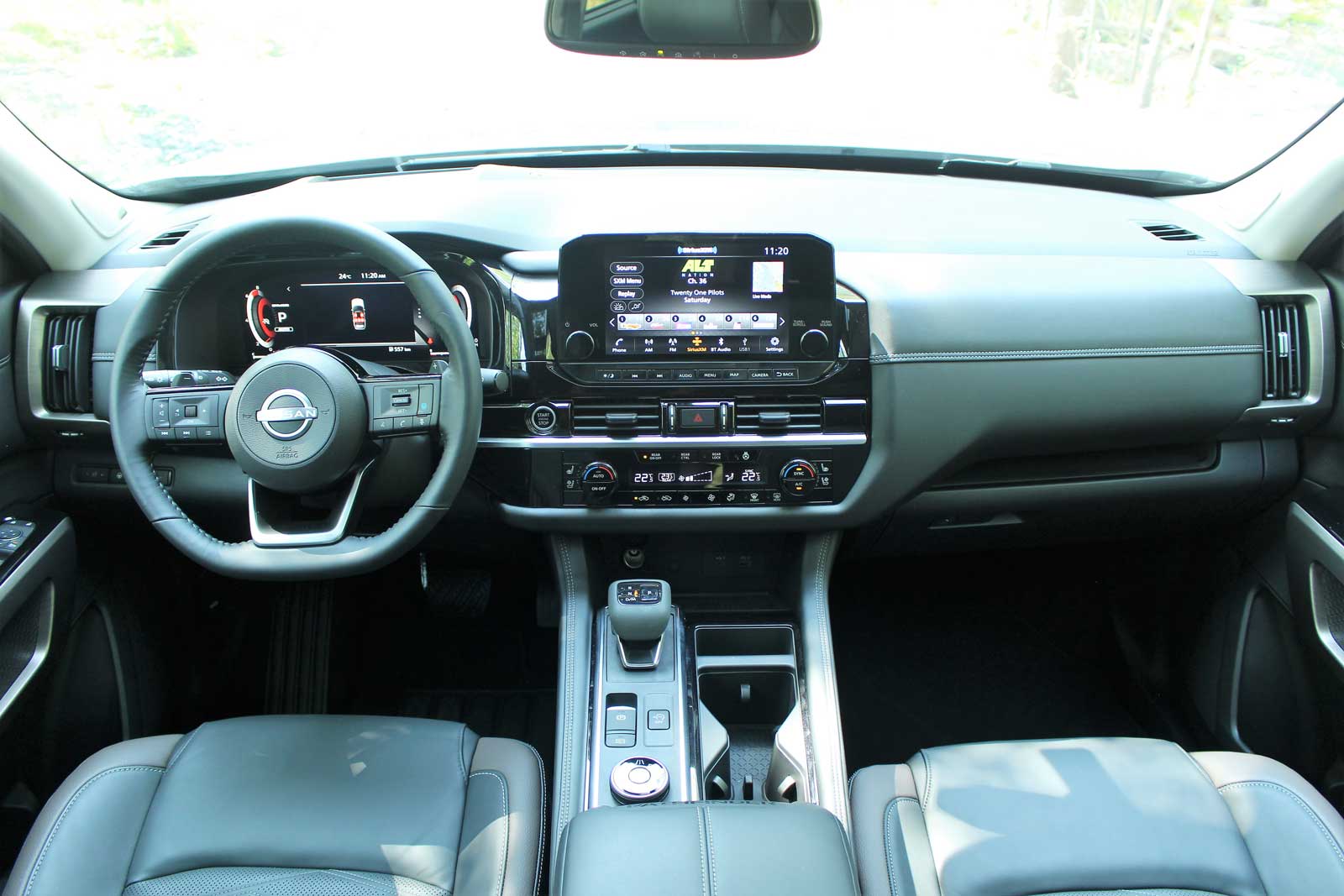 The 3.5L V6 engine found in the previous-gen model is back, keeping its output of 284 horsepower and 259 pound-feet of torque. On the other hand, the continuously variable automatic transmission has been ditched in favour of a conventional nine-speed automatic, and while fuel consumption has gone up on the highway cycle, it’s down on the city cycle. The end result is that the combined figure rises from 22 to 23 mpg on AWD models in the U.S., and lowers from 10.7 to 10.5 L/100 km in Canada. 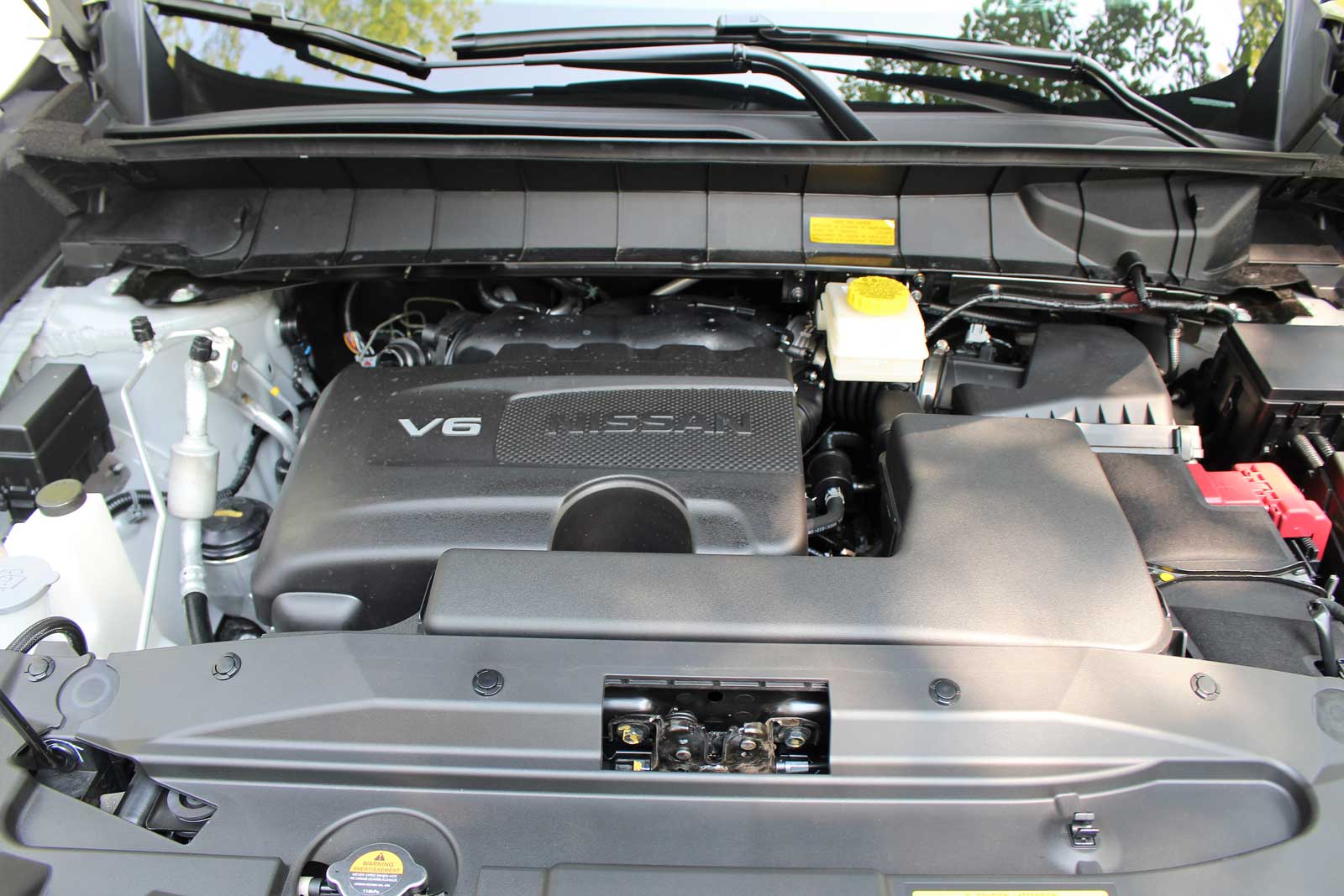 By the way, a front-wheel drive Pathfinder is offered south of the border, while AWD is standard up north. Among three-row crossovers with a six-cylinder engine, only the Highlander (by a negligible margin), the Highlander Hybrid and the Explorer Hybrid are more efficient, while the turbo four-cylinder Explorer, Acadia and Ascent consume slightly less fuel. Overall, the Pathfinder can be considered an efficient vehicle for its size and power.

The 2022 Nissan Pathfinder’s suspension has been reworked with an increase front and rear roll stiffness, wider tires have been fitted and there’s a new dual-pinion electric power steering system as well. The vehicle is stiffer with a 50% increase in high-strength steel, and the doors are made from aluminum—which really do feel light. The automaker also claims it reduced road noise with thicker carpeting, acoustic laminated front-door glass and thicker rear-door glass, improved door and floor isolation as well as better engine bay insulation. 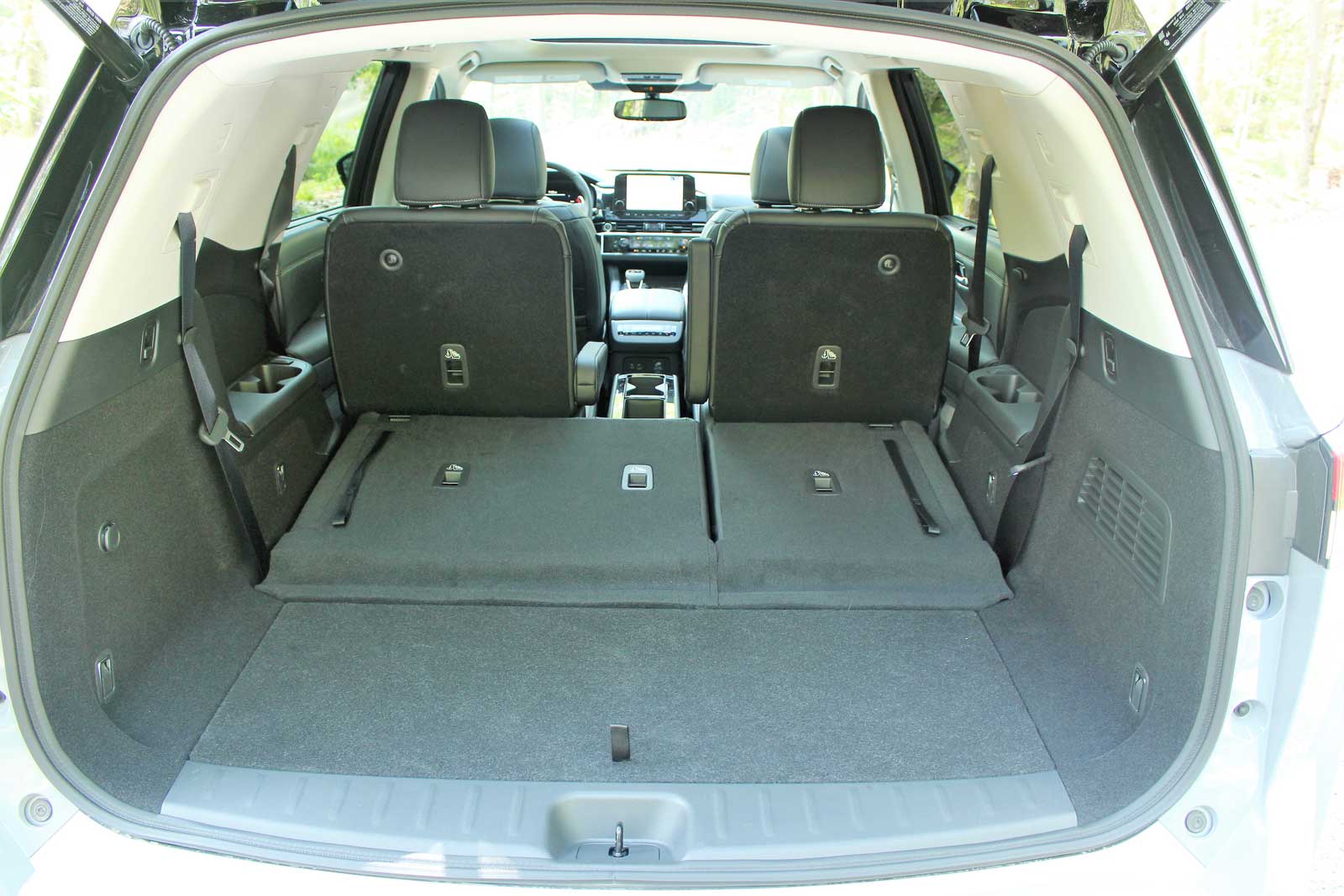 Unsurprisingly, ride quality is way better than in the old Pathfinder, although rolling down the streets of Kingston, we did find the suspension a little stiffer than we’d like. However, on the open road, the big crossover is indeed quiet and comfortable, with much-improved steering feel. Our trip included a lot of gravel and cottage trails, and on these surfaces, the Pathfinder always felt composed, and the AWD system is now more reactive than before, as it doesn’t wait for wheel slippage before sending power to all four wheels or the ones with the most traction. The all-wheel drivetrain is still front-wheel biased and can send up to 50% of available torque to the rear wheels as needed.

Towing capacity remains among the highest in the midsize segment at 6,000 pounds (2,922 kilograms), and the 2022 model adds Trailer Sway Control for safer driving, although the base S trim is rated at only 3,500 pounds (1,588 kg) as it lacks extra cooling features. In AWD variants, there’s also a new seven-mode drive system with Sport, Snow, Sand and Mud/Rut settings, among others. Hill descent control is also included like before. 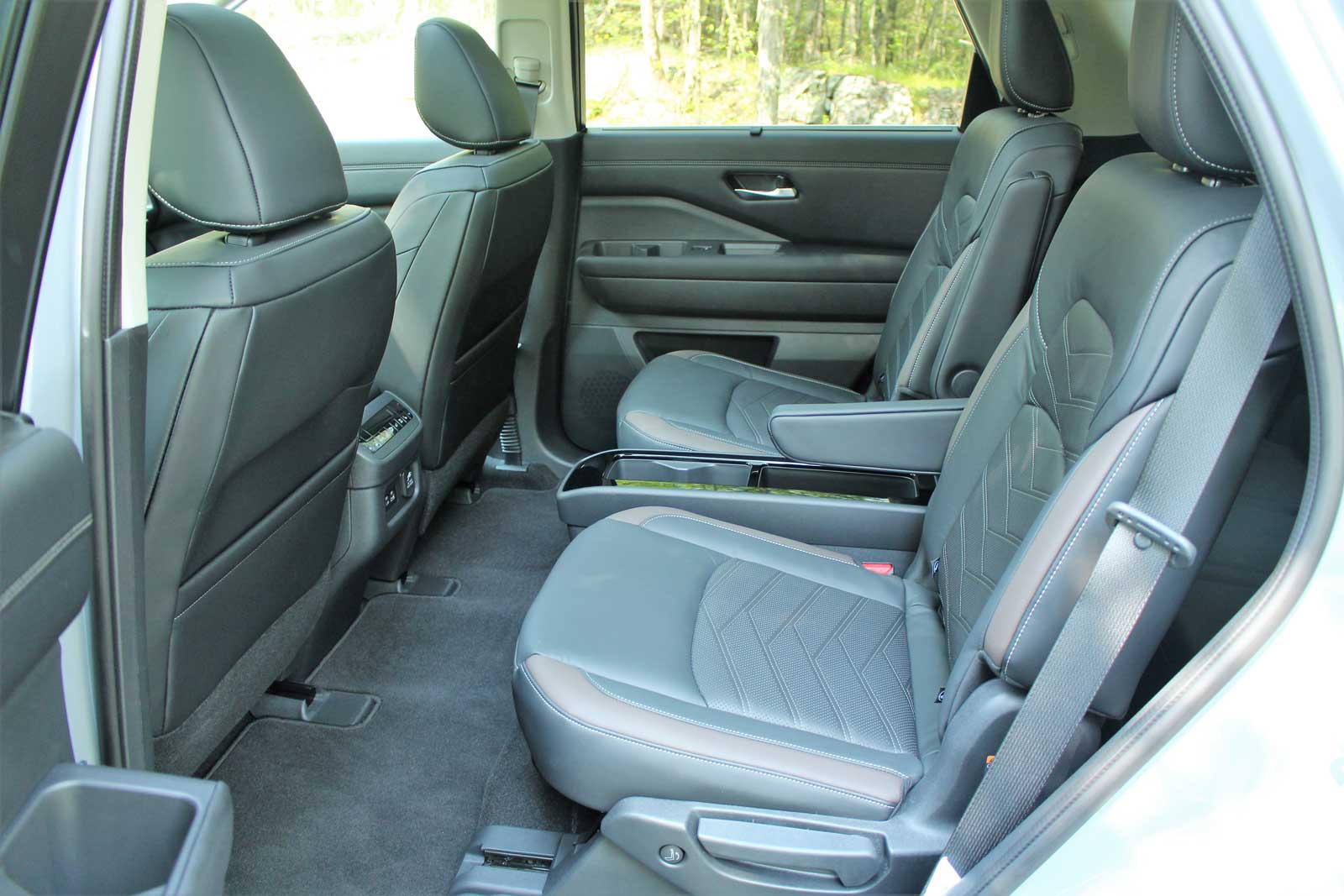 The 2022 Nissan Pathfinder gets a welcome technology update as well, with a 9.0-inch infotainment touchscreen (up from 8.0 inches), wireless Apple CarPlay and Android Auto, wireless phone charging, head-up display and a fully digital 12.3-inch driver instrument panel. Nissan’s ProPILOT Assist can keep the vehicle in its lane on the highway, and thanks to Navi-Link, it can proactively reduce speed knowing there’s a curve coming up ahead. The system can also stop the vehicle in a traffic jam and get it rolling again on its own for up to 30 seconds without driver intervention. Of course, the person behind the wheel must be attentive at all times.

The new Pathfinder is offered in S, SV, SL and Platinum trim levels, and its price ranges from $33,410 to $48,090 in the U.S., and from $43,798 to $54,398 in Canada, freight and delivery charges excluded in both cases. A new black-painted roof is available for a little extra coin. The crossover is going on sale this summer.

Overall, the 2022 Nissan Pathfinder has improved in many ways, the biggest differences compared to the outgoing generation being refinement, driving enjoyment, new tech and an edgy new design. It offers good value for the asking price due to its lengthy list of standard features, especially in Canada, although it isn’t a screaming deal. Most importantly, it’s easier to love and will undoubtedly entice satisfied Pathfinder owners to trade in for the new model. On the other hand, while it caught up with its rivals in the three-row crossover market, it doesn’t innovate in any way, and catching up might not be enough to increase its market share above what the previous-gen Pathfinder achieved. But for now, we can only applaud Nissan for a successful redesign.

Compass gets new engine and transmission More power and some extra safety features For 2023 the Jeep Compass is getting a new engine. A...
Read more
Previous articleShould you buy a 2022 Genesis GV70 3.5T?
Next article2022 Volkswagen Taos Sales Put on Ice

What does it take these days to test and share your impressions of driving a Tesla vehicle? It's worth mentioning that the California-based manufacturer...
Read more
First Reviews