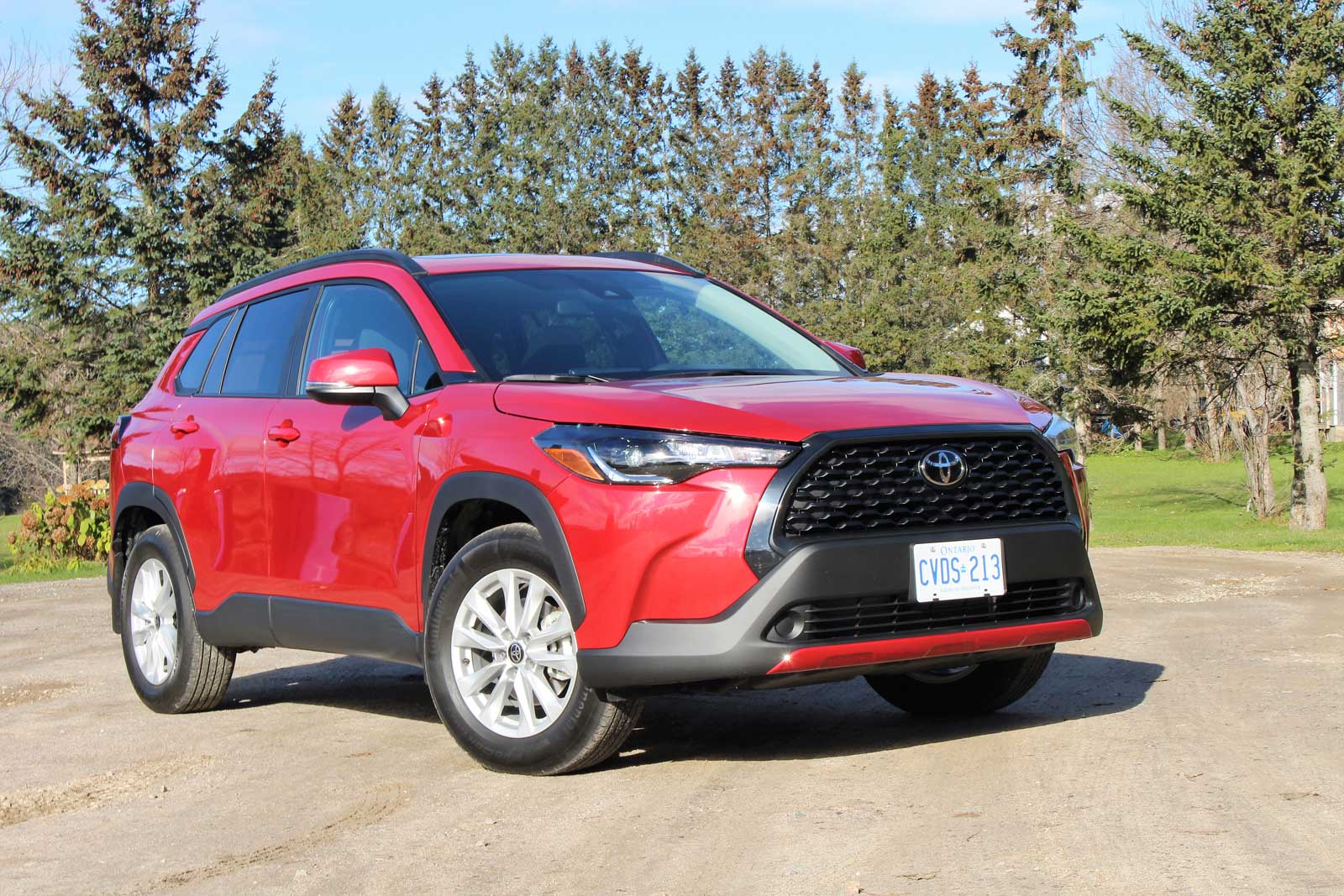 A household name arrives in a trending vehicle segment.

It was bound to happen. The 2022 Toyota Corolla Cross’ arrival in dealerships couldn’t arrive at a better time, as the Corolla nameplate and the subcompact crossover category are both more popular than ever right now. The Japanese brand could actually struggle to build enough of them—especially for the Canadian market. 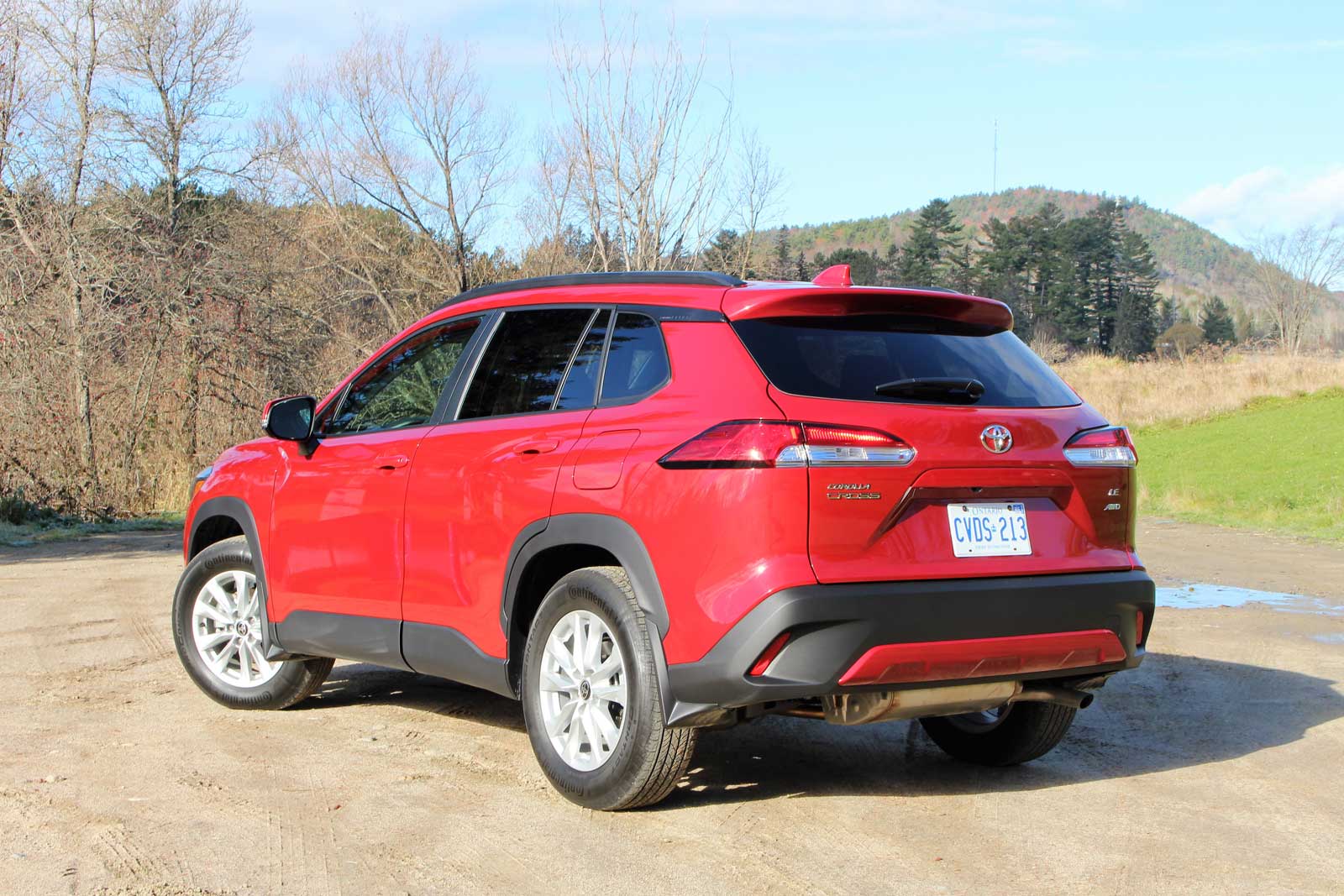 The Toyota Corolla in sedan and hatchback format is selling well. So well, in fact, that it overtook the Honda Civic on the passenger-car sales charts so far in 2021, and could very well topple its arch-enemy off its throne, ending the Civic’s 23-year reign as the Canada’s best-selling car, and consolidate a 1-2 finish for Toyota in the U.S., placing second in sales behind the Toyota Camry.

Meanwhile, small crossover sales keep rising as consumers are shifting from cars to these car-based utility vehicles. The Toyota RAV4 is the best-selling crossover/SUV in both countries, and the 2022 Toyota Corolla Cross could become another hit for the automaker. 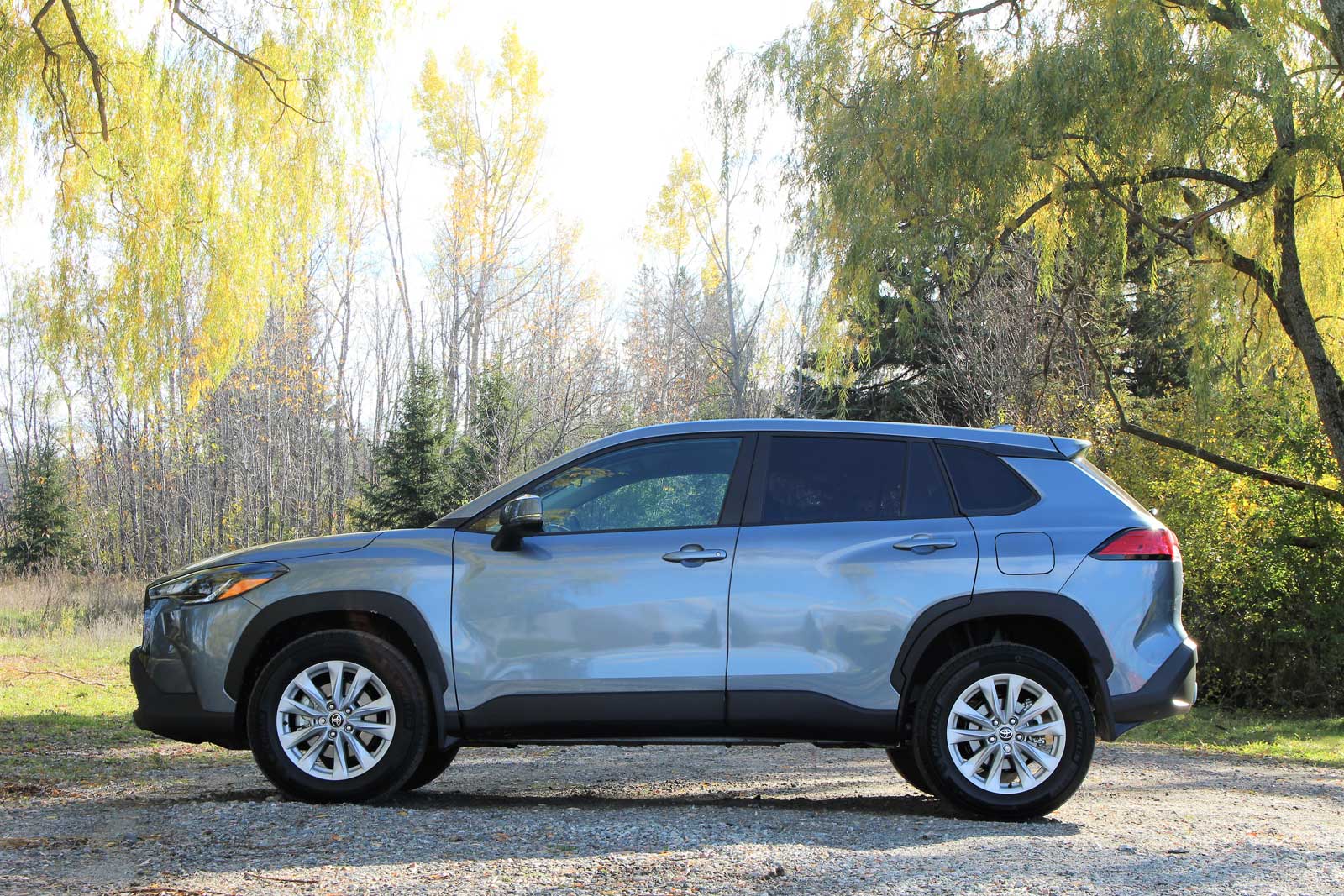 The Corolla Cross slots in between the Toyota C-HR and the RAV4. It’s a subcompact-sized vehicle, but for a few years now, that segment has been branching out in two directions. There’s the pint-sized urban crossovers group in which the C-HR competes alongside the Kia Soul, the Nissan Kicks, the Chevrolet Trax and the Hyundai Venue. The subcompact-plus Corolla Cross will go head to head with the Mazda CX-30, the Nissan Qashqai/Rogue Sport, the Ford Bronco Sport, the Chevrolet Trailblazer, the Honda HR-V, the Subaru Crosstrek, the Hyundai Kona, the Kia Seltos and many, many more.

Is there actually any room for the 2022 Toyota Corolla Cross in the company’s lineup? The latter tends to think so, as the C-HR is rather focused on young urban dwellers, while the Cross will cater more to small families on a budget. On the other hand, loyal Toyota customers could very well choose this new model over a sensible Corolla sedan or a sporty hatchback, a smaller C-HR or a costlier RAV4. There’s definitely some overlap, but nothing to worry about. 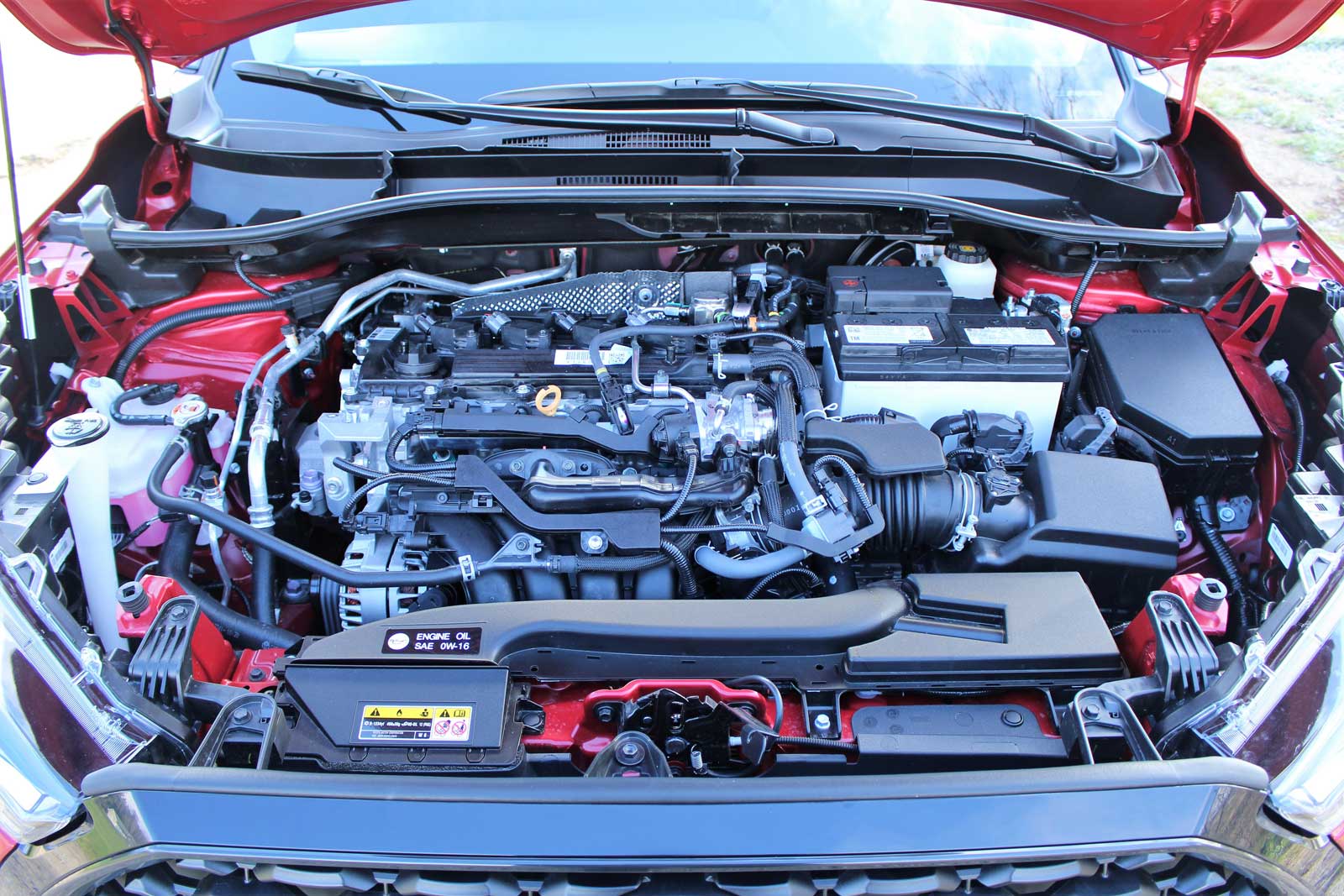 To be honest, we don’t see much resemblance between the Corolla Cross and the sedan, or the hatchback. Then again, neither did the Corolla Matrix when it was sold in the U.S. and Canada during the 2003 to 2014 model years. Rather, the Corolla Cross looks a little bland to our tastes, like a scaled-down Toyota Highlander, with its horse-collar grille surround that’s either black or painted a dark gray, in addition to plastic wheel arches and available roof rails. A black or chrome trim piece also stretches above the door frames, on which the model’s name is embossed above the rear-quarter windows.

The 2022 Toyota Corolla Cross is built on the same TNGA-C platform as its sedan and hatchback siblings, and borrows the latters’ uplevel powertrain. It’s a naturally aspirated 2.0L inline-four that develops 169 horsepower and 151 pound-feet of torque, managed by a CVT Direct Shift automatic transmission, which includes a fixed first gear for cleaner launches, before moving over to a continuously variable setup that also features a manual mode and 10 pre-programmed gear ratios. 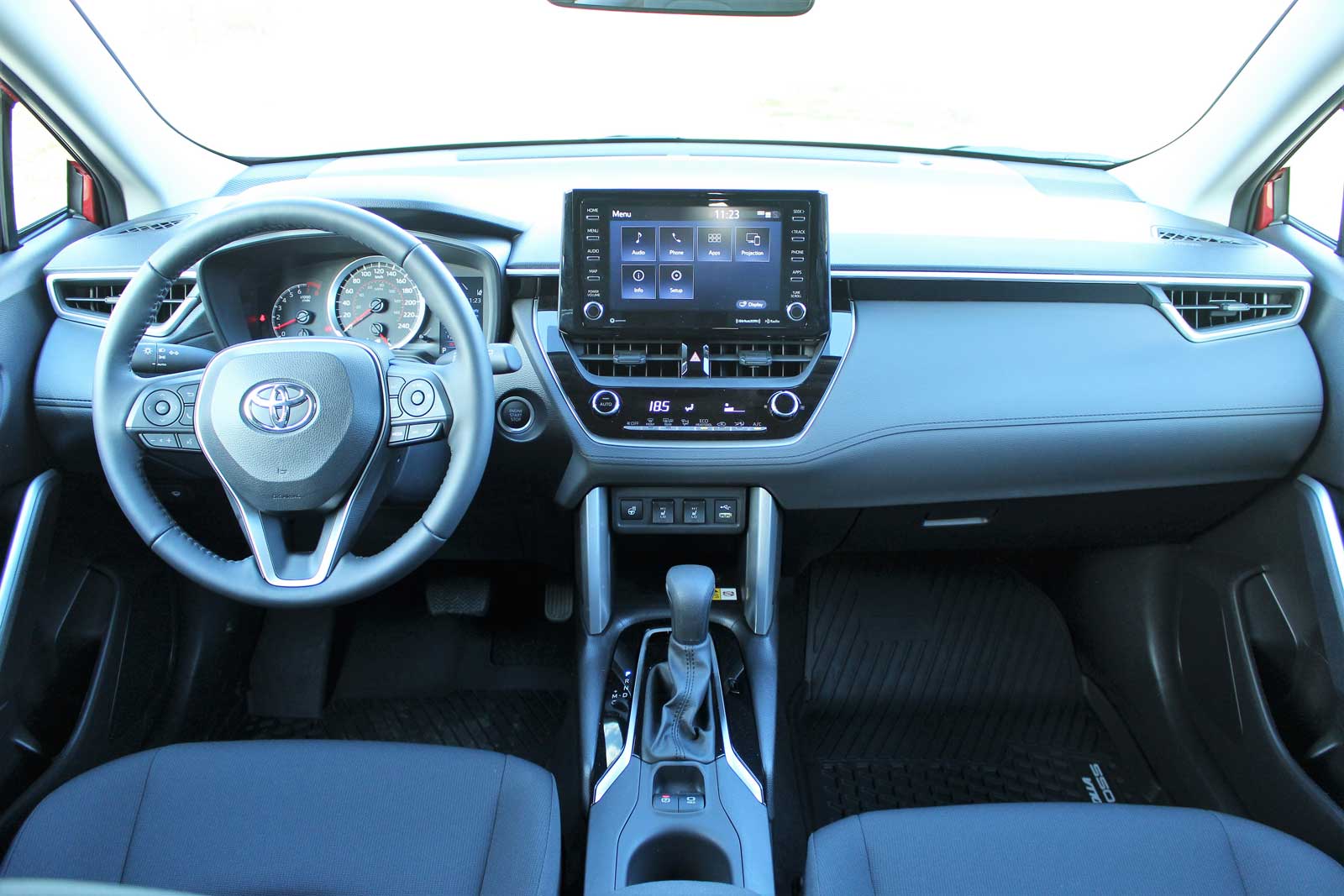 It all sounds racier than it really is, and then engine can get noisy at wide-open throttle. However, the powertrain is otherwise smooth, there’s a sufficient amount of power under light loads, and fuel economy is quite good.

In Canada, the L and LE trim levels can be chosen with front-wheel drive or all-wheel drive, while the LE Premium and XLE variants include AWD as standard. In the U.S., the L, LE and XLE trims are all offered with or without AWD. This setup favours the front wheels under normal driving, and can instantly send up to 50% of the engine’s torque evenly to the rear wheels when slippage occurs. 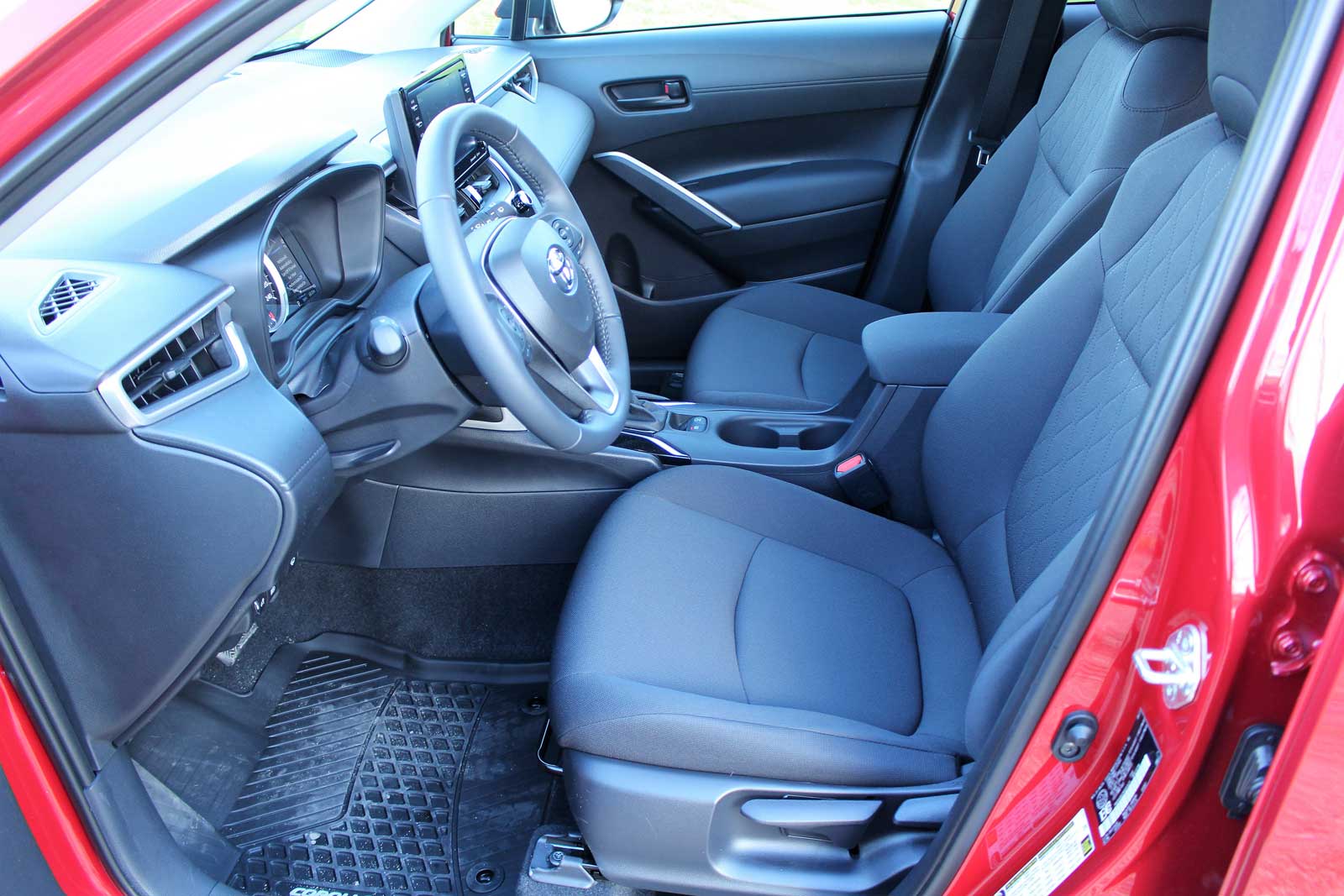 With AWD, the Corolla Cross boasts a combined city/highway average of 7.8 L/100 km or 30 mpg, leading the segment among non-hybrid models. By the way, a Corolla Cross Hybrid is on the way next year, although exact details have yet to be announced for the North American market. During our brief drive, we managed 7.9 L/100 km or 30 mpg aboard an AWD model, and 6.7 L/100 km or 35 mpg with a FWD vehicle.

We like the way the Corolla Cross drives, with good steering feel and refined ride quality. Both the 17- and 18-inch wheels and tires do a good job of soaking up road imperfections, and aside from the slightly wide front pillars, visibility is good all around. 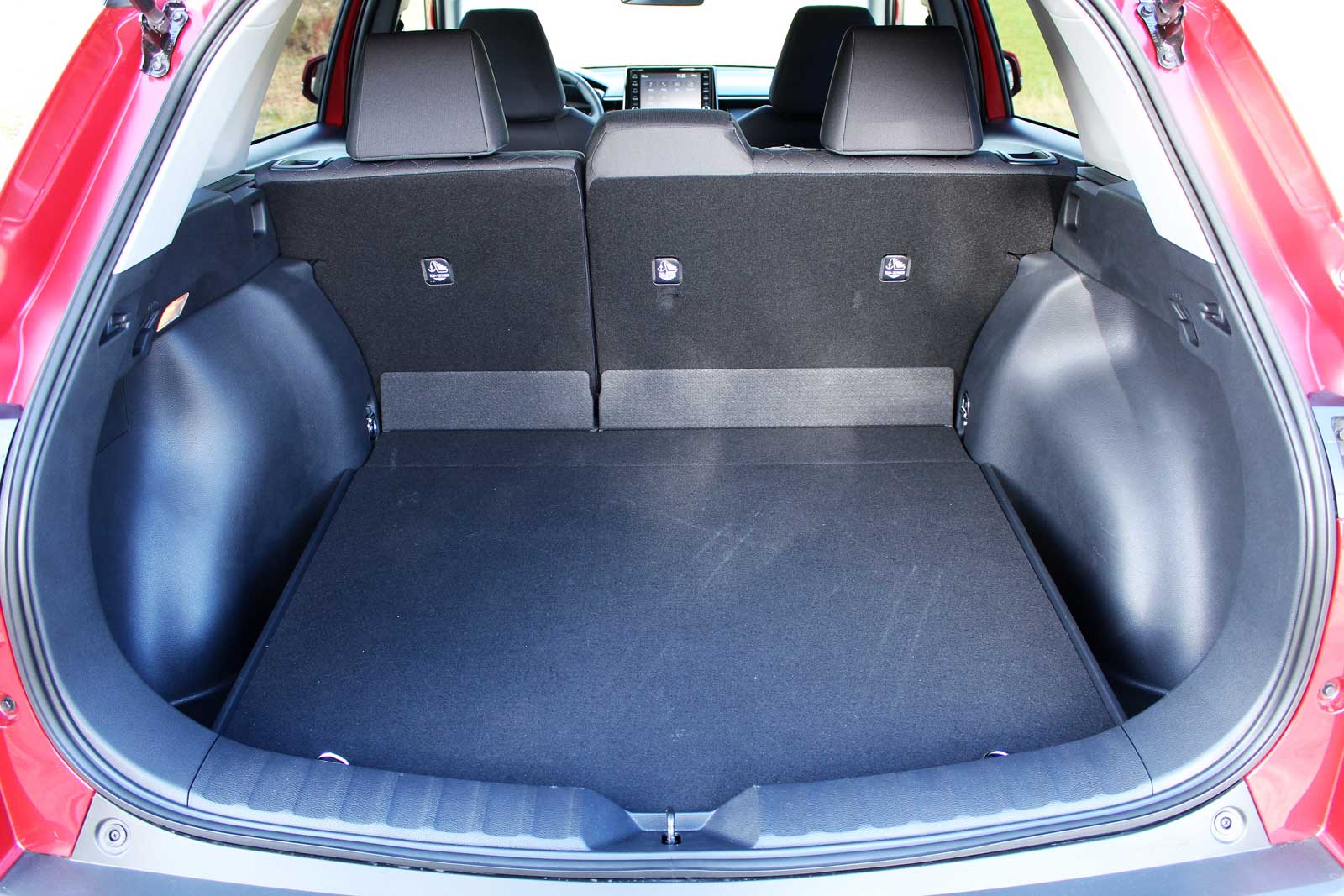 The interior is typical Toyota, with an interesting design and layout that’s far from spectacular, but won’t offend anyone. The floating seven- or eight-inch infotainment touchscreen is easy to use, fairly easy to reach, and can integrate Apple CarPlay and Android Auto. The seats lack a little lumbar support, but otherwise, they’re fine for two-hour-long road trips. In addition, although rear-seat legroom seems scarce at first glance, the fact that we sit straight up helps being comfortable back there. We would’ve liked to rear seatbacks to offer a recline adjustment, but they don’t.

Cargo space varies from 696 to 750 litres with the rear seatbacks in place, according to Toyota Canada, and from 24.3 to 25.5 cubic feet according to Toyota USA. With the seats folded down, that volume grows to between 1,840 and 1,891 litres (65.0 and 66.8 cubic feet). That’s class-leading space, followed very closely be the Seltos and the Bronco Sport. We found the cargo area floor panelling to be a little flimsy, and the seatbacks don’t fold completely flat. Towing capacity is rated at 1,500 pounds or 680 kg. 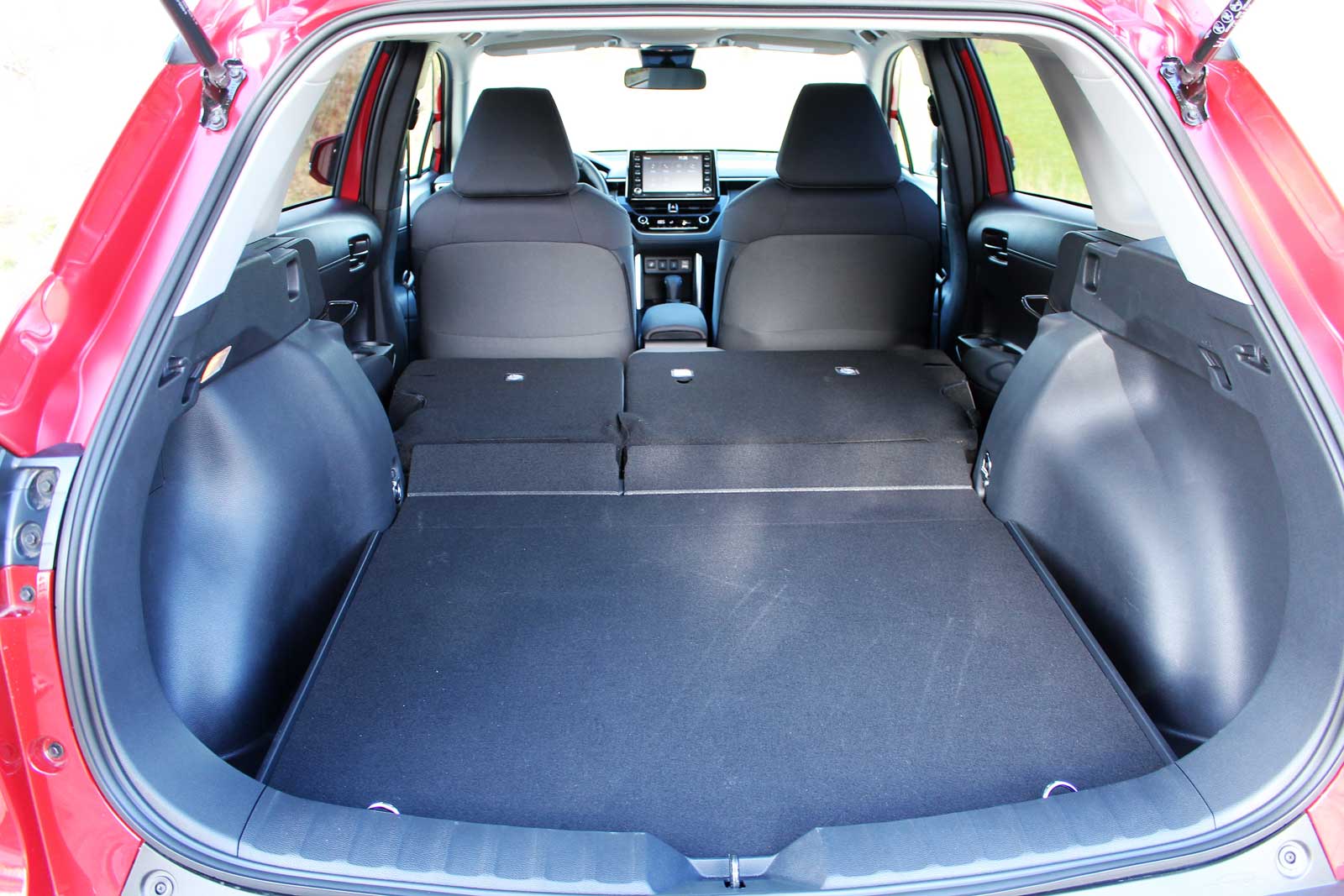 In Canada, the 2022 Toyota Corolla Cross L starts at $24,290 before freight and delivery charges, and includes heated front seats, LED headlights, a six-speaker sound system and a seven-inch touchscreen. AWD is a $1,400 option. The $27,090 LE adds an eight-inch touchscreen, 17-inch alloy wheels, a heated steering wheel, a smart key, a cargo cover, blind-spot monitoring and more, while the $30,590 LE Premium gets a sound system upgrade with Remote Connect app connectivity, a power sunroof, wireless phone charging and roof rails. The $33,990 Corolla Cross XLE features a nine-speaker JBL stereo, SofTex leatherette upholstery (in Black or two-tone Macadamia), a power-adjustable driver’s seat, dual-zone climate control and a power liftgate, among other things. We think the $28,498 LE AWD is the value proposition here. 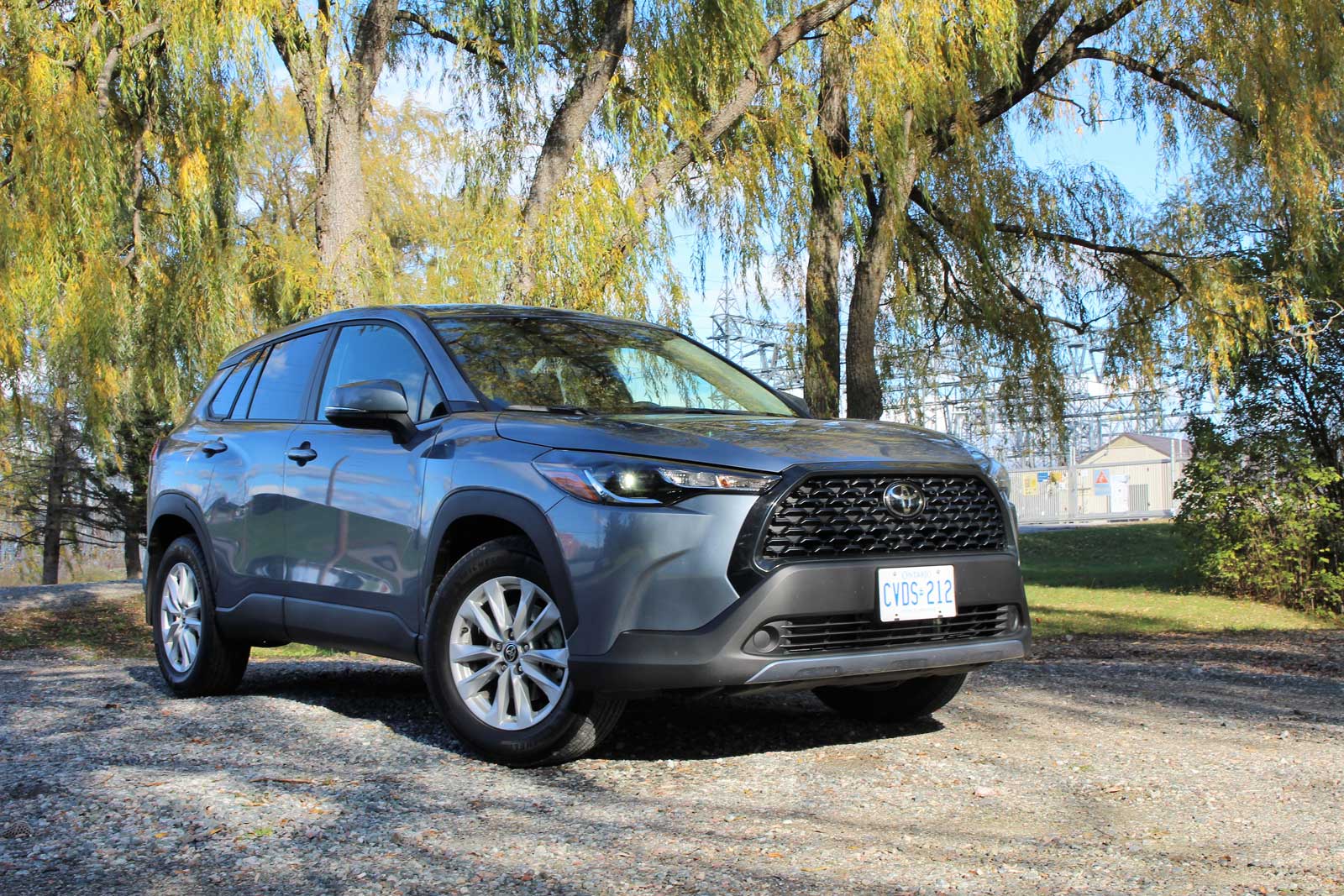 In the U.S., the Corolla Cross L starts at $22,195 before freight and delivery charges, and is equipped with the same features as the Canadian-spec version minus the heated seats. The $24,545 LE adds an eight-inch touchscreen, wireless phone charging, 17-inch alloy wheels, blind spot monitoring, roof rails, a smart key and automatic climate control, while the JBL stereo and the power sunroof are optional. The $26,325 Corolla Cross XLE gets 18-inch wheels, heated front seats, SofTex leatherette upholstery, a power driver’s seat, dual-zone climate control and a cargo cover, while the JBL system, the power sunroof, the power liftgate and adaptive headlights are optional. All-wheel drive is a $1,300 extra on all three trims. Both the LE and the XLE are good deals.

The 2022 Toyota Corolla Cross is arriving at dealerships now, and is built at a new factory in Alabama, shared with Mazda who’ll soon start producing a small crossover of its own. In a nutshell, the Corolla Cross brings new levels of fuel economy and cargo space in the subcompact-plus segment, but doesn’t bring anything new or innovative within that category. Nonetheless, the Corolla name itself is enough to convince shoppers that like most Toyota utility vehicles, this new one is likely a rationally sound purchase.

Team driving Ariya EV from pole to pole Journey will take 27,000 km, but plenty of coffee Nissan has just revealed the vehicle that...
Read more
Previous article2021 Ford Mustang Mach 1 Review: Spectacular, but I Want the Bullitt Back
Next articleToyota Comes in Third as the Most Hindering Company Against Climate Change