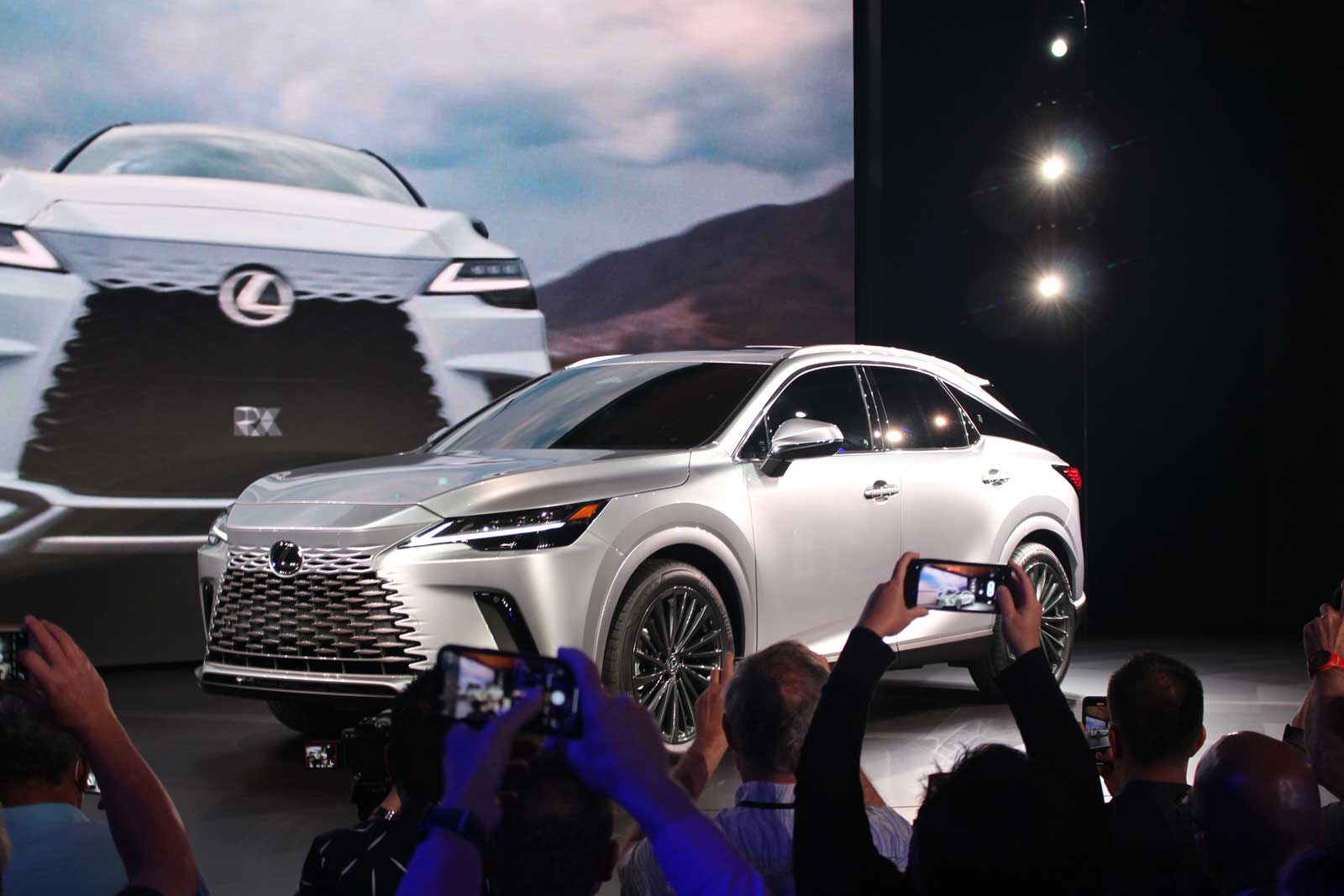 The Japanese brand’s most popular model, the 2023 Lexus RX midsize luxury crossover received a full redesign with new powertrains, a modern new look and upgraded technology. Obviously, a hybrid setup is available just like before, but now, there’s a new plug-in hybrid variant as well. 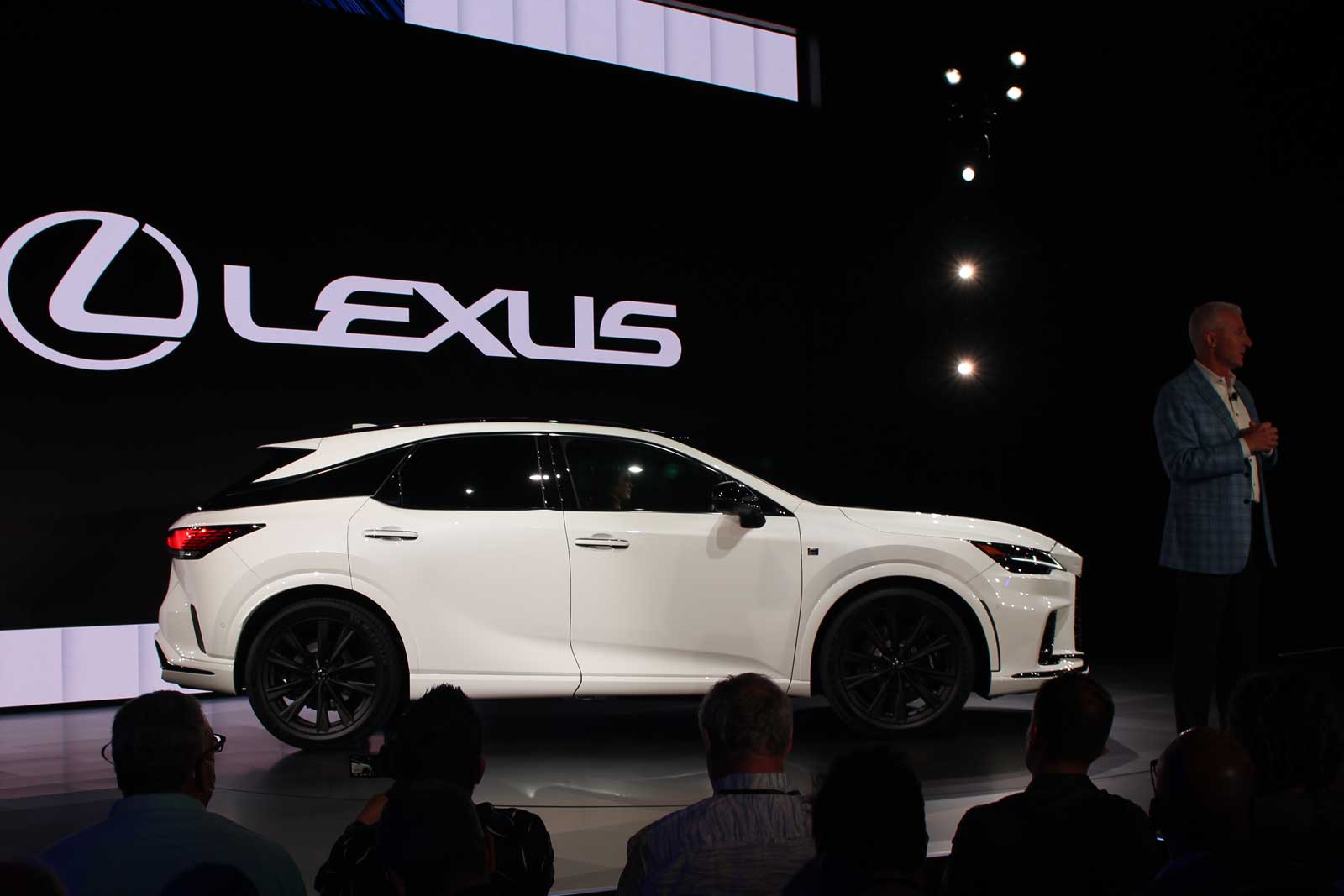 It all starts with new sheetmetal, unmistakably Lexus, but with some new design touches such as a more pronounced nose and a new interpretation of the marque’s spindle grille. A racy crease curves up from the base of the front door to the rear door handle, while the rear sports full-width taillights and a more aggressive bumper. Wheel sizes range from 19 to 21 inches, and there are 10 hues on the paint colour palette.

Inside, the 2023 Lexus RX boasts a familiar appearance, with an elegant design, a digital driver instrument panel and, new this year, an infotainment touchscreen as big as 14 inches. The doors get electronic latching and there are six interior colour schemes to choose from, which can be spruced up with one of four trimmings, including open-pore wood and dark aluminum.

The RX rides on a new and stiffer platform, and wheelbase has increased by 60 millimetres, while width is up by 25 mm and the roofline is 10 mm lower. Curb weight is down by up to 198 pounds or 90 kilograms. That’s compared to the outgoing regular-length RX, as for now, no news about the return of a stretched RX L. The new generation’s rear overhang has been shorted by 60 mm, but the brand claims an increase in cargo space and a lower load-in height, in addition to more rear-seat legroom.

Although the previous-gen RX could be ordered with a 3.5L V6 and a hybrid 3.5L V6, the redesigned 2023 Lexus RX will offer four different powertrains, each one consisting of a four-cylinder engine. The RX 350 is equipped with a turbocharged 2.4L four that develops 275 horsepower and 317 pound-feet of torque, managed by an eight-speed automatic transmission. In Canada, AWD is standard and the brand estimates a 0-100 km/h time of 7.4 seconds and an estimated fuel consumption average of 9.8 L/100 km. In the U.S., the brand estimates a 0-60 mph dash in 7.2 seconds with AWD, 7.5 with in the front-wheel drive variant and a fuel consumption average of 24 mph.

Next up, the RX 350h receives a hybrid system consisting of a naturally aspirated 2.5L four, an electric motor up front, a smaller electric motor at the rear and a continuously variable automatic transmission, good for standard AWD, 246 hp and 233 pound-feet. That’s a lower output than the outgoing RX 450h’s 308 hp, but in Canada, Lexus claims a 0-100 km/h time of 7.6 seconds and a fuel economy average of 7.1 L/100 km. The U.S.-spec variant scoots to 60 mph in 7.4 seconds and nets 33 mpg. There’s a new RX 450h+ plug-in hybrid as well, although final specs have yet to be announced.

No pricing is available yet, but the all-new RX will go on sale in Canada and the United States before the end of 2022.

They have sold their 200,000th EV in the US. They now join Tesla and GM who’ve already run out of credits. The question is...
Read more
Previous articleThe 2023 Toyota RAV4 Hybrid gets a New Woodland Edition
Next article2023 Toyota Corolla Cross Hybrid Combines Power and Efficiency