In the last few days, Hyundai released this video that traces the beginnings of N, the letter that defines the Korean brand’s performance models. The nearly eight-minute short film is a sort of link between the brand’s early efforts and the future of the performance cars overhauled by the engineers assigned to the sports division.

Beyond all that has been presented over the past decade, including cars used in international rallying or championship racing on the pavement, not to mention the multiple mid-engine prototypes, it is the rolling laboratory that is the focus of this video.

You can see the designers working on 1:1 scale model, including the beautiful N Vision 74 coupe powered by fuel cells or the sporty looking electron driven RN22e, the latter of which is expected to become the Ioniq 6 N.

There’s even a very brief appearance of the Korean brand’s first performance electric vehicle, the long-awaited Ioniq 5 N, a non-identical cousin of the Kia EV6 GT that’s been on sale for a few weeks already. In fact, we shouldn’t be too surprised to learn that the N version of the angular crossover inherits a similar configuration, at least in terms of powertrain power. For your information, the Kia EV6 GT gets a pair of electric motors that produce a whopping 576 horsepower and an equally astonishing 546 lb-ft of torque. Will the Ioniq 5 N be even more explosive than this creation from the other Korean brand? It’s too early to tell, but it should be soon. 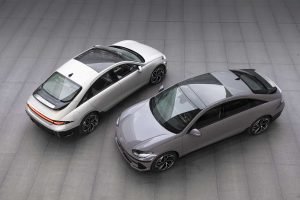 We also learn during the eight-minute video that the engineers are trying to reproduce the feeling of the combustion engine vehicles of the past. In fact, that’s one of the goals of the RN22e prototype, which uses this torque vectoring system, dubbed e-TVTC (Electric Torque Vectoring by Twin Clutch), a device that exists to ensure optimal handling in corners. The motorsports division goes even further, promising that future vehicles tattooed with the letter will be able to withstand the abuse of closed course driving.

Brake energy recovery technology is also maximized to make braking consistent. In addition, Hyundai is also working to perfect the sound of its future performance EVs with N Sound and N e-shift systems, the latter of which mimics the shifting of vehicles with internal combustion engines.

The future looks bright for Hyundai’s N division. It remains to be seen whether this desire to make vehicles fun will materialize, but with the success of the Korean group’s brands, it would not be surprising if it did.

This is the third time a similar incident happens with different EVs at an Electrify America station. The vehicle will need to receive...
Read more
Previous articleBMW M CEO Says There is Room for an M4 CS: Report
Next articleHot 2024 Acura Integra Type S Coming Next Summer