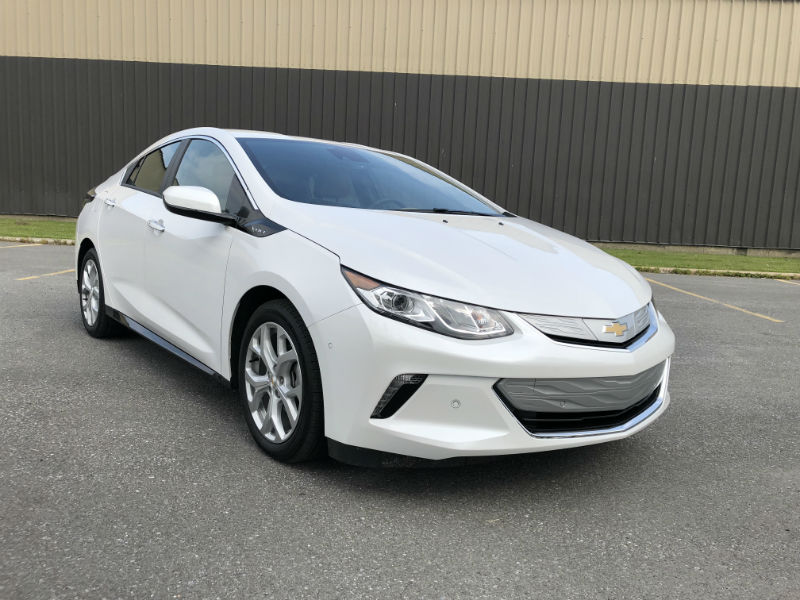 All told, I’ll have driven and reviewed 12 electric, plug-in electric and variations of both vehicle types so far in 2018. The cars vary from a $200k 2018 Tesla Model S P100D all the way to a Volkswagen e-Golf. Some I really disliked, such as the Mitsubishi Outlander PHEV, while others I thoroughly enjoyed like the BMW 740Le. The surprises have been the Honda Clarity PHEV and the Chevy Bolt.

Chevrolet’s Volt sits somewhere in the middle of the pack. Let’s give the car credit for one thing: The Volt has done much for the electric car, much like what the Toyota Prius did for the hybrid. Although it never seemed clear in the beginning what the Volt actually was, many consumers eventually caught on. This range-extended electric car has served as a bridge between the scary EV and comfortingly familiar gasoline powered vehicle we all know and love.

The 2nd generation Chevrolet Volt, introduced for the 2016 model year, has further narrowed the gap with its more conventional styling. Some aspects of its technology however should be revised to keep up with high-range EVs such as its showroom neighbour, the Bolt.

If the badging is ignored, the Volt could be mistaken for a fancy 4-door coupé version of the Cruze. As far as modern car designs go, the Volt is sleek and does not stand out as an unusual automobile like the Honda Clarity does. 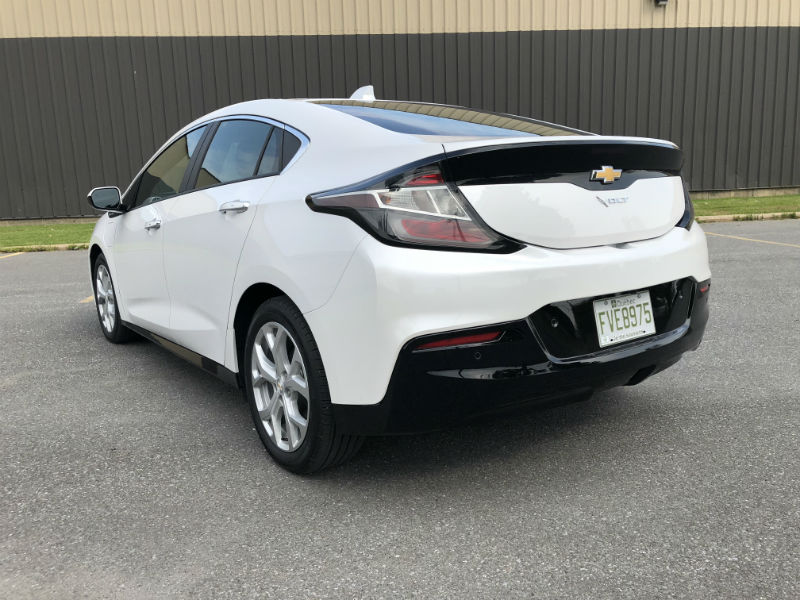 The Volt’s cabin has also evolved into something more conventional. The dashboard’s design is premium with multiple surfaces and lovely fit and finish. This too is a far cry from the first generation Volt. It’s clear that efforts were made to make the new Volt appeal to a broader audience.

Chevy also worked in some premium touches as found in my Premier tester. Leather seating is standard and at no extra charge, all black or black and brandy tones are available. The latter is completely luxurious – makes me think of what the ELR was probably supposed to feel like…

The 5-door hatchback body style is equal parts aerodynamics and versatility. The enormous glass hatch opens up to a useable 300-litre trunk. It’s smaller in volume than the Bolt’s but it’s far more accessible. A few golf bags will slide in without difficulty. 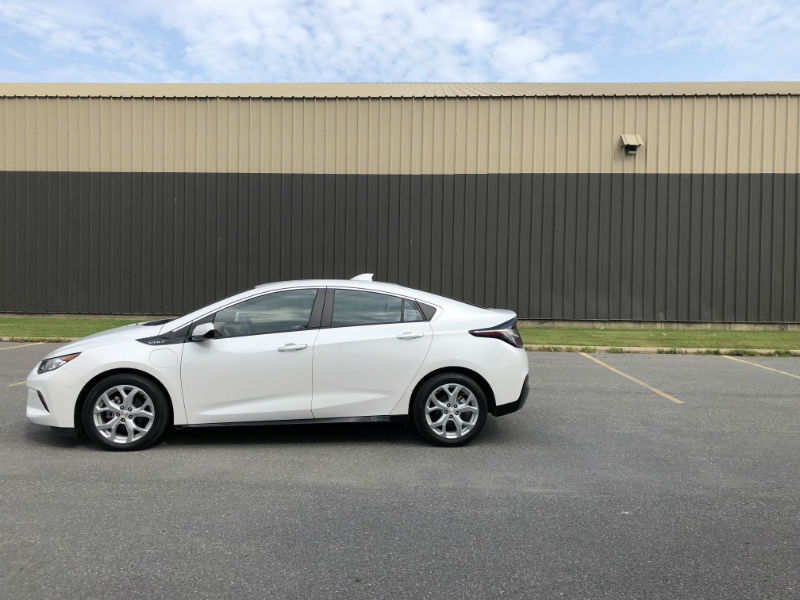 New for the latest Volt is that, in the spec sheet, it now seats five. The original Volt had only four spots so once more, in order to broaden the car’s appeal, it now has five seatbelts. The truth is that no one should sit in the rear middle position. Headroom is snug and rearward slopping roofline cuts into our personal bubble.

The front occupants get more wiggle room overall. There’s plenty of storage for smaller carry-on items such as phones, wallets and keys. All four real seats are comfortable.

Base price for the 2018 Chevrolet Volt LT starts at $41,045. This is a $5,000 premium over most of the entry-level EVs with a 200-km range. Standard features include an 8-inch display in the IP, an 8-inch central display, wi-fi hotspot, heated front seats, satellite radio, and more.

The Premier’s $45,145 sticker causes it to lose traction over the $46,445 Bolt LT. The Volt has more equipment such as leather seats, extra safety features and Bose audio but the Bolt, and its 383-km of EV range, will never use a drop of fuel, is quicker and its EV drivetrain is more advanced.

Let’s get right to it. The Volt’s 18.4 kWh battery pack endows it with an 85-km EV range. This is the kind of range that makes sense for the Volt and PHEVs; a 35km range is a bad joke. 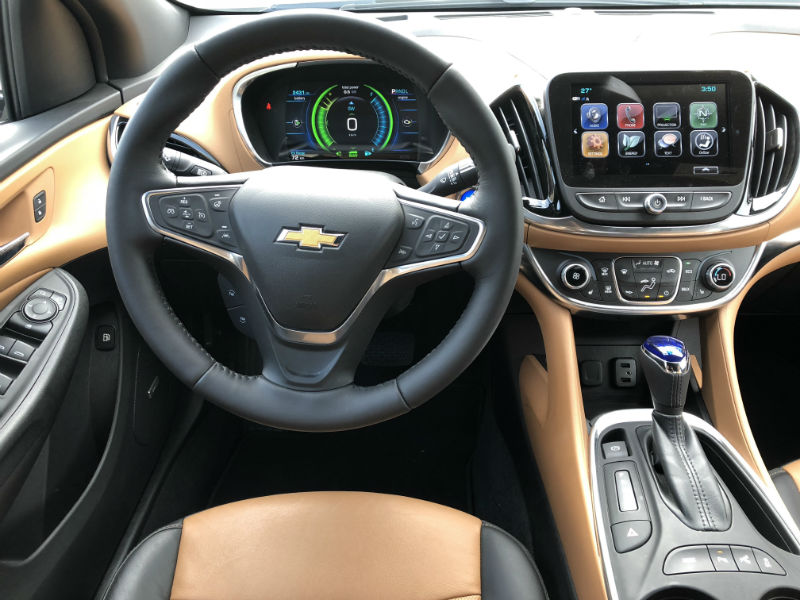 The Volt’s drive unit drive system offers 149-horsepower and 294 lb.-ft. of torque. The all-important range extender is a 1.5-litre 4-cylinder engine. Although this is more torque than the Bolt, the Volt is not as spritely and the other despite their similar weight.

Available drive modes in the Volt mimic those from the Bolt, with one very important distinction. Like the Bolt, there’s “D”, “L” and the wheel paddle. It’s all very intuitive. You start off in “D” or pull all the way back on the shift-lever for “L”, which increases regenerative braking. I find “L” ideal for the city or negotiating traffic. The one distinction comes from the Volt’s inability to come to a full stop without the use the brake pedal.

I cannot put enough emphasis on the one-pedal driving experience; once you get a taste for it, it’s impossible to go back. The Volt’s saving grace is its more refined ride. The suspension is more forgiving and the drive is more refined.

I’ve become a big fan of Chevy’s alternative modes of transportation. My money would go on the Bolt for all the reasons I stated in my review. If you’re unsure, here’s a tip: drive the Volt first, be impressed, then test the Bolt, and be smitten.

Scientist explains how a mix of hybrids can lower emissions more quickly Says we simply don't have enough lithium to go all-EV An EV-only...
Read more
Previous article2019 Honda Accord at a glance
Next articleNew electric Mercedes-Benz EQC SUV unveiled today in Sweden