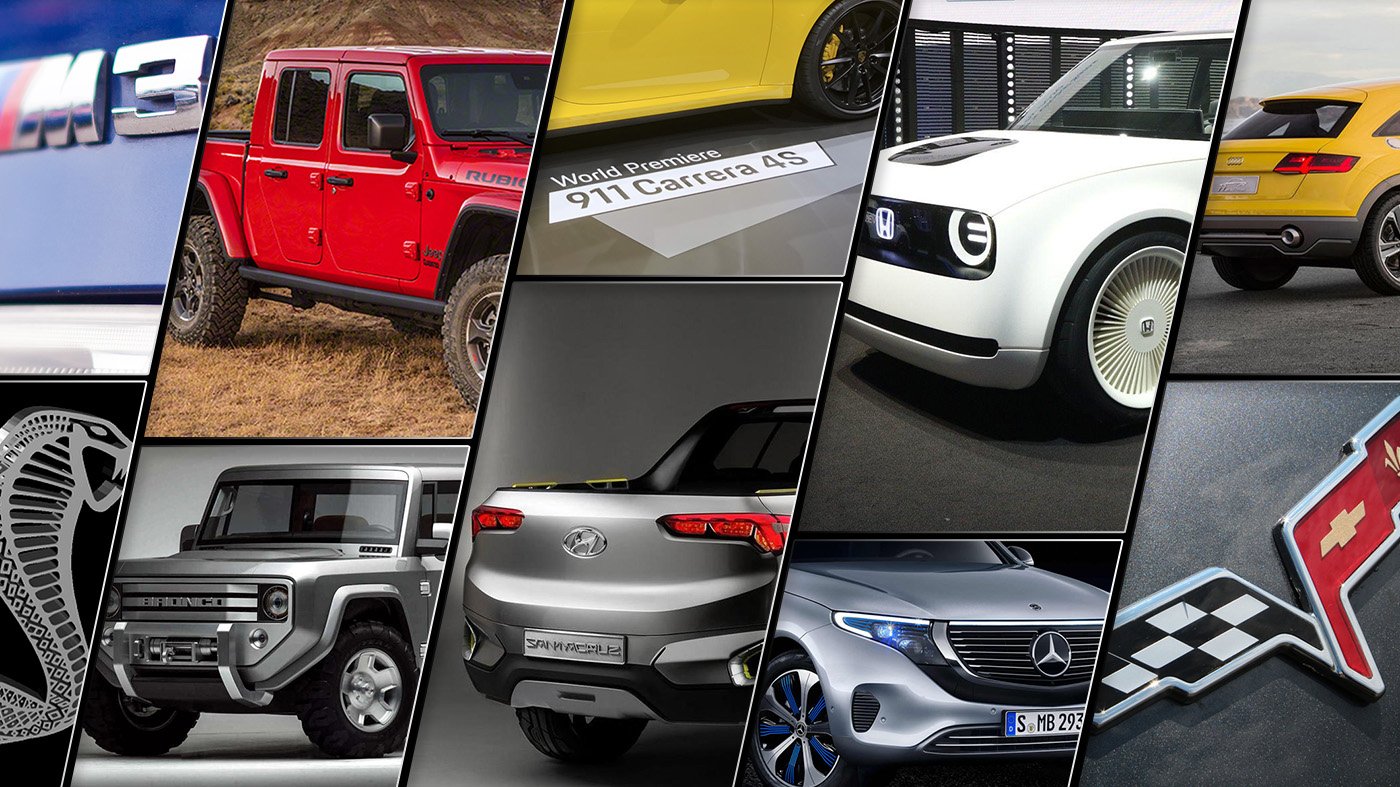 The new year has arrived which means that 2019 new cars and trucks are slowly but surely coming online.

The sheer number of future products, both gas- and electricity-powered have us very excited about what the pipeline has in store for us in the new year with a wide range of both 2019 and 2020 vehicles set to hit the market in the first half of the year.

We’re especially happy about the variety of styles. While there are numerous SUVs, we can also expect pickups, performance cars, urban dwellers and compact cars.

We’d say the following list is 85% accurate. As we all know, things can change very quickly and we all well aware that we’ve left a few of them off the list. If you’d like, please tell us which significant models we’ve omitted in the comments below.

Audi’s future cool compact Q4 CUV is the BMW X2 fighter that will without a doubt be very popular. This stylish vehicle will more than likely hurt the A4 sedan but odds are they will sell many more of them. Audi’s currently designing some of the hottest EVs and the Q4 fits right in.

The next generation M3 should, as far as we can tell, pack some even more serious performance to the tune of 465- to 500-horsepower. Aiding in making this car even more hardcore could be some significant weight reduction making it quicker than the current M3 Competition. This M3 may very well be the last to do without some form of electrification. It’s good news, in a way. The final full-petrol M3 will be a hoot and the money’s on the fact that the next one will be even faster.

The legend of America’s sports car will begin a whole new chapter later in 2019 when the mid-engine-d car breaks cover. Performance is expected to reach new heights – pricing will likely do the same. Manta Ray and Grand Sport are two versions expected to be launched. The GS is rumored to be powered by a twin-turbo 5.5-liter V8 that apparently produces a monstrous amount of power. So much so that GM’s apparently enquired about potential legal liabilities…

We know the Bronco is coming. What we’re not sure of is if Ford will spin it off and create a sub-brand. One thing is certain is that if it looks anything like what’s circulating on the interwebs, it’ll not only put the hurt on Jeep but crush the Chevy Blazer. It will share a number of components with the new Ranger so we’ll get little bits of insight throughout the year.

Pictures of this beast leaked all over the internet a few months ago which was inevitably followed up with speculation about power and performance. Ford Performance is expected to go balls-out crazy with what may very well be the last of its kind with more than 750-horsepower, a 7-speed dual-clutch transmission and hopefully a manual option. We’ll find out more at the NAIAS.

When you think about it, Honda’s Urban EV is exactly what we all thought electric cars would be like – small, quirky, with limited real-world use and “cheapish.” Lo and behold, the Urban EV has become one of the coolest electric cars in the world! Honda’s brilliantly tapped into its glorious past for inspiration and we can only imagine how long the wait-list will be before consumers are actually able to take delivery.

The tease is almost over. Hyundai has confirmed that their compact pickup will be headed to showrooms as soon as possible. If the bean-counter can allow the designers to keep the concept’s style intact, it might become the 2nd coolest pickup ever, after the one just below…

Hands down, this is the coolest truck to be released in the first fifth of the 21st century. It’ll win all truck-related awards and FCA’s made sure that they’ve left nothing to chance. It’s capable, tough, loaded with off-road equipment, technology and it looks great. Well, a 2-door version would have been killer but then it would win 2-door-everything awards, so that wouldn’t be fair.

More attitude, more room, more power all equals more fun in our minds. The Soul’s distinctive design has evolved perfectly and fits now more than ever with the CUV-mad times. The turbocharged 1.6-litre returns and a new more powerful EV will also be offered. The base 2.0-liter 4-cylinder engine is slightly more powerful and can be mated to an Intelligent Variable Transmission (IVT).

Every member of the JLR family is undergoing major changes and have been for the past few years. While the next Evoque will surely be interesting, it’s the return of the legendary Defender that we’re most excited about. Its styling will be unique and its climbing abilities will immediately be the stuff of legend.

This fully electric SUV sets aside an overly stylish outer shell in favour of delivering the goods, all the while still being a handsome Mercedes utility vehicle. Its 80 kWh battery pack will help provide up to 450 km of pure EV range while its two electric motors will combine and produce 400-horsepower. Not only will it be quick to 100 km/h (5.1 seconds) but its rapid DC charging capability will allow battery reserves to climb from 10 to 80% in only 40 minutes.

This 2-door high-performance hybrid from Volvo’s performance brand is all kinds of right. Essentially a 2-door S90, the Polestar 1 provides a real-world petrol-free driving range of 150 km. All the while, the electric motors combined with the supercharged and turbocharged 2.0-litre engine combine to produce a whopping 600-horsepower and 738 lb.-ft. of torque. Oh, and it happens to be incredibly sexy too.

The 8th generation Porsche 911. The 992. The Icon. We already have loads of information on this one. In fact, we dove deep into the tech that makes it tick only to step away desperately looking forward to actually driving the car. The new 911 is all 911, and then some.

We’re banking on the hopes that Subaru really will take their Viziv Performance concepts to production. There are many pieces of wonderful news linked with the cars as a manual transmission will return, a hatchback is almost certainly part of the plan and Subaru might return to the World Rallye Championship just to remind everyone who really owns it.

The 8th generation VW Golf is headed to production and if we’re to believe the German Giant, it will be the last to be motivated, at least in large part, by internal combustion engines. Mild-hybrid and PHEV versions will be offered. The car will be longer, wider, loaded with the latest autonomous and connectivity technologies.